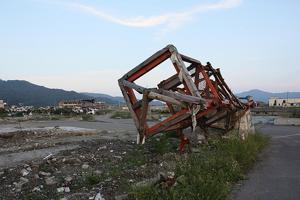 Scenes of destruction near the town of Kamaishi after a tsunami struck the coast of Japan on March 11, 2011. Caritas Japan has mobilized many volunteers to help remove rubble and debris, clean buildings, and provide comfort to survivors, especially the aged.
Credits: Caritas

“I saw the water rising, and then the huge wave. Then the sea and the land were covered with fire—the whole city was on fire.” The words aren’t out of Revelations. Masato Sakamoto, a resident of Kesennumma on Japan’s east coast, is describing the events of 11 March 2011. “While it was burning, at sunset, the snow started falling.”

In a city dozens of kilometres away, 79-year-old Keiko Kikuchi also saw the coastline burning as she scrambled uphill to escape the tsunami. “There was a path up the mountain,” she remembers. “At the end of the path, I had to climb with my hands. I don’t know how I did it.”

“We saw the water at our backs. I saw my house filling with water and all the cars floating.”

Not far from Keiko’s neighbourhood, Sakae Chida was helping children in her afterschool day care centre flee. They ran up to a main road called Route 45, but weren’t safe even there. So they climbed higher, to the forests. “In the woods, I had a cross clutched in my hands,” she says. “Many children were crying and holding on to the tree trunks.”

More than 15,000 people died that day. Hundreds of thousands who survived had no home to go to once the waters receded. For months, they lived in evacuation shelters like schools gymnasiums.

“That first night, the aftershocks were still going on,” says Arasawa Sachiko, who runs a preschool in a town called Kamaishi. She rushed over 30 children to a shelter on high ground. “It was very cold so they huddled together under a sheet.”

As the days passed, parents came for their children. “The roads were blocked by debris so they had to walk, sometimes five hours,” she says. “When they realized their child was alive, it was a very dramatic scene. Usually people here don’t express their feelings, but this moment was different. They hugged them so hard.”

The Japanese government mobilized to help survivors, and so did Japan’s small but energetic Catholic community. The church in Kamaishi asked the preschool what it needed, and then brought food, bedding, and children’s clothes donated by other groups. “Caritas ran a soup kitchen for the children– vegetable soup and fried noodles ,” says Arasawa. “The most important thing is that Caritas responded very quickly.”

Caritas went to the shelters, filling in gaps wherever they found them. “The first activity was to get water,” says Satoshi Onodera, who spearheaded the Kamaishi church’s relief efforts in the first days after the tsunami. “Then three meals a day. We made 100 rice bowls each time, also milk, soup and pudding.”

With the electricity still off, the Kamaishi church brought candles from its chapel for evacuees to use. People searching their destroyed houses for lost items would come back covered with mud, so the church arranged for a public bathhouse to be free. Because they was no hot water to cook noodles at the shelter, Caritas brought gas tanks and heated water to its makeshift “cafes.”

Within weeks, Caritas had set up bases in several coastal cities and recruited volunteers to help clean tons of debris. “I lost everything, even my dishes,” says a woman visiting a Caritas cafe in a church basement. “The first floor of our place was gone and I couldn’t live on the second floor, the mud was 6 inches deep. Caritas volunteers helped clean my house.”

The volunteers—people of all ages—used shovels and other hand tools to muck out homes and clear roads. “It’s really tiring to remove the tatami layer of the flooring and clean underneath,” say Fr Daisuke Narui, who oversees Caritas Japan’s relief efforts. “And there were so many flies after the tsunami—in the water, the mud, the refuse.”

Volunteers also cleaned the small family-owned factory of Futoshi Honda. The area’s economy is heavily dependent on catching and processing seafood, but the tsunami carried off rafts with special lures that are used to gather oysters and seaweed. So when the leader of an oyster farmers’ group approached Caritas asking for assistance, volunteers helped fishermen make more rafts.

The government, along with volunteers from Caritas and other charities, has accomplished an enormous amount. But six months after the tsunami, almost 83,000 people still cannot return home.

For those living in government-built temporary shelters, Caritas volunteers are a familiar sight. The volunteers load small pickup trucks with food, diapers, towels and more, driving to the new lots and setting up stations. Caritas cooks hot food for the residents, encouraging them to mingle at the barbecues and get to know their neighbours.

“A key issue that people are facing is isolation,” says Sawako Inae, Programme Officer for Caritas Japan. Volunteers trained in grief care spend hours listening to survivors at the Caritas cafes. “It’s a place where people can cry, and express their sadness and anger,” says Fr Daisuke. “We listen to the person—what are their fears and their hopes.”

They talk about their sorrows, but also about empathy. “I watch TV about people in Africa,” says a woman at a Caritas cafe. “It’s so hard there. The mothers carrying heavy loads…now I understand.”

For children who lived through the events of March, Caritas holds festivals with balloons, games and toys. “If not for Caritas,” says preschool director Arasawa, “the children might not have had those happy moments.”

Before winter falls, Caritas will distribute items like jackets, blankets and heaters. It will also repair damaged schools, with plans to help over 3,500 students have a better place to learn. It will renovate an elder care facility and continue home visits. It will bring food to thousands of people via a mobile kitchen.

After experiencing disaster, the people of Japan’s east coast are working their way back to normalcy. “We had a hard time,” says Arasawa. “But we got a lot of help from all over the world and it gives me strength.”

“I can’t do anything alone,” says Keiko, the 79-year-old who climbed her way to safety. “But with many people, including people from church, we can do something.”

“If I overcome this, I’ll never be afraid again,” she continues, smiling. “It’s my mission to live and never give up. To live is precious.”