Q and A Horn of Africa 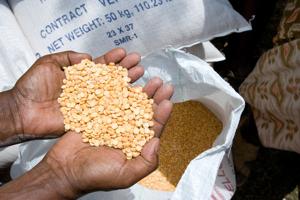 Workers hired by CRS partner agency the Hararghe Catholic Secretariat (HCS) inspect bags of split peas provided by USAID before a CRS-supported distribution as part of the ongoing Productive Safety Net Program in the town of Chelenko. The program targets more than 302,000 vulnerable people with food to fill recurring food gaps across much of the region.
Credits: David Snyder/CRS

What is the humanitarian situation in the Horn of Africa?

In Kenya, Ethiopia, Somalia, and nearby areas, a severe drought has led to massive numbers of people going hungry. Famine has been declared in several districts of Somalia. Because goats and cattle are dying of thirst and starvation, people who herd livestock are losing their source of food. Hundreds of thousands of children are malnourished.

The extreme weather has dried up crops, as well as rivers and other water sources. These losses come at a time when farming households’ food supplies are already extremely low, as they wait for their mid-year harvest to mature–if they were able to plant crops or have not used the seeds to feed their families.

Sharply rising food prices–caused not only by the drought but by world economic conditions–have affected many impoverished people in the region, including those in towns and cities.

What are people doing to cope?

Hundreds of thousands of Somalis have left their country, often on foot, for refugee camps in neighbouring Kenya and Ethiopia. They are fleeing both starvation and armed conflict.

Herdsmen are moving farther into new territory to graze their livestock, sometimes encroaching on land traditionally used by other communities. In some parts of the region, local fighting has broken out over water and grazing land rights.

Villagers are cutting down trees to sell for fuel or are migrating to already overburdened cities where it is very difficult to find work. Herdsmen are selling off livestock to buy food, which damages their future livelihoods. The late and erratic rain has changed the yield times for crops, leaving farmers confused as to when they should plant.

How many people are affected?

According to a 30 September report by the United Nations’ Office for the Coordination of Humanitarian Affairs (OCHA), 13 million people in the region are in need of emergency assistance. Particularly in Somalia, thousands are at risk of death without urgent intervention. In Ethiopia, due to the combined drought, crop and livestock losses, millions of people will not have enough to eat or enough water for the next 3 to 6 months.

What has Caritas done to help?

[View interactive map with Caritas projects in the area]
Since the drought’s impact became pronounced in mid-2011, Caritas has:

Caritas members have worked in the region for years to minimise the impact of extreme weather. In places like Dire Dawa in eastern Ethiopia, Caritas built irrigation systems eight years ago—and that water is helping vegetable farmers weather this drought.

In many areas, however, the situation is dire. In coming months, Caritas will continue to create or repair irrigation systems to make sure people have clean water to drink, along with good water for their crops and herds. Caritas will also continue responding to immediate food needs to prevent hunger.

How much money has been collected and how many people are being helped?

With help from Catholics worldwide and other generous contributors, Caritas is developing or implementing programmes worth 31 million euros to help hungry people in the Horn of Africa.

Caritas programmes are helping 1,113,000 people in the Horn of Africa.

Which Caritas groups are involved?

Caritas is responding to the food crisis through its national members Caritas Kenya, the Ethiopian Catholic Secretariat (Caritas Ethiopia), and Caritas Somalia. Many other Caritas members—including CRS, CAFOD, Trocaire, Cordaid, and Caritas Germany–are also present on the ground. Caritas emergency appeals have been supported by many countries in Europe, North America, Latin America, and Oceania.

Will things get better?

If the rains in autumn 2011 are good, the situation will improve. In some locations, the demand for water trucking has been reduced because it is no longer needed.

However, it will take time and the support of the international community for drought-affected families to recover from the loss of livestock and the loss of one or two crop seasons.

What can we do to prevent this in the future?

We need to work on irrigation to make the land arable. Considerable investment is needed in simple, low-cost, low-technology solutions to improve the retention of rain and ground water, replenish underground aquifers. We need to improve soil fertility, conserve rangelands, and increase the use of drought-resistant seeds and natural fertiliser and compost.

Fostering peace and stability in Somalia is important. Without peace, people will not be able to meet their short-term food needs or invest in their future.