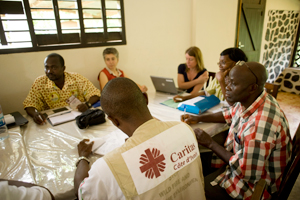 The history of Côte d’Ivoire is marked by coups d’état, social unrest and violent clashes. The civil war that broke out between 2002 and 2004 led to massive displacement of the population and had substantial repercussions in neighbouring West African countries. Despite various peace agreements and the adoption of a process to resolve the crisis in 2007, the country was unable to avoid a new conflict following the presidential elections in November 2010.

Though its people are less poor than others in West Africa because of the country’s cocoa and coffee industries, years of conflict have profoundly damaged Ivoirians’ lives: thousands were killed or had to flee their villages. Jean Djoman, the head of Caritas Cote d’Ivoire emergency team, explains what happened during the months of violence and how Caritas is helping displaced people rebuild their lives.

How did this crisis come about?

On 28 November 2010, Alassanne Ouattara was elected as president of the Republic of Côte d’Ivoire in an election that was legitimised by the Independent Electoral Commission.

Along with the majority of the international community, the country’s prime minister recognised Mr Ouattara’s victory.

However, the outgoing president, Laurent Gbagbo, who was standing for re-election, did not acknowledge his defeat and was declared the winner by the Constitutional Council. He received support from the head of the Army. International pressure, mediation attempts and an economic blockade on the country did not bring about a peaceful political transition. In February, the country lapsed into armed conflict, which in April 2011 saw the victory of the armed forces loyal to Mr Ouattara. Armed forces took the former president, Laurent Gbagbo, prisoner.

What have been the consequences of this crisis for the civilian population?

According to the UN, more than 3,000 people were killed during clashes between opposing armed forces.

The civilian population did not escape the violence that broke out between the two factions. Cases of rape, looting and destruction of villages and homes were reported.

According to the High Commissioner for Refugees, in escaping this violence, around 220,000 people were displaced to the interior of Côte d’Ivoire and around 200,000 more sought refuge in neighbouring countries, primarily Liberia.

How did Caritas respond?

Caritas Côte d’Ivoire immediately deployed all its resources to help those who had been affected and displaced in various parts of the country.

Tens of thousands of people received direct assistance from Caritas Côte d’Ivoire. With an active presence in almost all of the 20 sites where displaced persons gathered at the height of the crisis, Caritas Côte d’Ivoire distributed food, household and hygiene items, as well as ensuring protection. In the capital Abidjan and its surroundings alone, Caritas provided assistance to more than 20,000 displaced persons, primarily women and children.

The activities covered the following sectors:

Is the crisis over?

No. Even though Mr Ouattara is now in place, a great deal still needs to be done before Côte d’Ivoire gets back to normal.

Thousands of people are still unable to return home because security conditions have not been met, or their house or village has been destroyed, or they don’t have the necessary funds to make the journey and means of support when they arrive.

Caritas Côte d’Ivoire’s assistance efforts are continuing. An observer mission visited the country in June to prepare actions that will be carried out during a second Caritas intervention phase.

Caritas Côte d’Ivoire also wishes to accompany the process of reconciliation and promotion of peace and social cohesion. However, this process will only be feasible when the security of goods and persons has been guaranteed and stability has been re-established throughout the country.