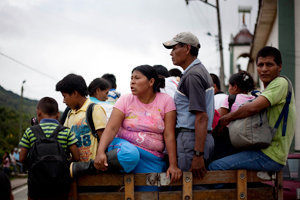 The Caritas Working Group for Colombia says the human rights situation in Córdoba continues to be critical.

The group of European Caritas agencies and Secretariado Nacional de Pastoral Social/Caritas Colombia visited the department of Córdoba from 25 to 28 October 2011. Their visit included the municipalities of Montería and Tierralt. During the visit, the group met with civil society organisations and church and community leaders.

Caritas says the situation is as a result of the military confrontations between the army and illegal armed groups, including the FARC guerrillas, the so-called criminal bands and the groups that have emerged from the demobilisation of the paramilitary groups.

The number of mass displacements has increased in the past two years and the confinement of the civilian population continues, especially in the rural areas of Tierralta, Puerto Libertador, Montelíbano and Uré (sub-region of Alto Sinú and Alto San Jorge).

The lack of government presence and social services for the victims of the armed conflict is particularly worrying. Some institutions are only open to the public one day per week, while victims have to endure long waiting times; some people even queue overnight with no guarantee that they will be seen to. The violence in the region has particularly affected vulnerable groups such as the Embera and Zenu indigenous groups, Afro Colombians, campesino leaders, women and displaced people. are

The Caritas Working Group for Colombia are alarmed by the increased risks and threats faced by human rights defenders.

To the Colombian government:

To the international community: