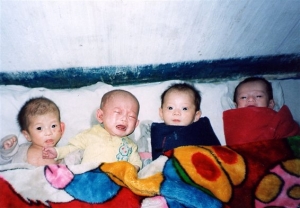 “Malnutrition has left children, pregnant women and the elderly so weakened that when a crisis hits its impact is even more dangerous.” said Michel Roy, Secretary General of Caritas Internationalis
Credits: Caritas archive

As world attention focuses on the death of North Korean leader Kim Jong-Il, Caritas urges the international community not to neglect millions of hungry people in the isolated Asian nation.

Floods, a harsh winter, poor farming infrastructure in North Korea and rising global food prices have left two-thirds of the 24.5 million populations without enough to eat. Caritas says aid is desperately needed in the country, but North Koreans risk becoming victims of political tensions on the peninsula.

Caritas members including Caritas Internationalis Secretary General Michel Roy met in December in Seoul to discuss the worsening crisis in North Korea and how best to respond to the needs of the people in the politically isolated country.

“Charity does not know any borders,” said Archbishop Osvaldo Padilla, Apostolic Nuncio to Korea, at the meeting. “In all these difficult realities of human pain and suffering, Caritas Korea continues to demonstrate, practically and effectively, that we are all one family.”

Michel Roy said, “The message from within the country is that the people of North Korea are in dire need of food aid. Malnutrition has left children, pregnant women and the elderly so weakened that when a crisis hits its impact is even more dangerous. The humanitarian imperative is that the ordinary people of North Korea receive aid and are not held hostage by the geopolitics.”

A survey by the UN’s emergency food agency the World Food Programme (WFP) found only about six percent of households interviewed had acceptable food consumption. WFP warns the cost of 1kg of rice now exceeds an average monthly wage.

With the help of Caritas members worldwide, and of the several million Catholics in South Korea, Caritas Korea has run DPRK programmes such as constructing a laboratory in Pyongyang to grow virus-free seed potatoes for food security, providing medicines and medical equipment to hospitals, repairing kindergartens and vaccinating children against hepatitis B.

Catholics in South Korea rallied to further help their neighbours in 2011.

A special Mass in June collected money to send food and 100 tonnes of wheat flour were delivered to a hospital and a nursery in July. With the help of various Korean Catholic organisations, Caritas sent another shipment of food that targeted babies and small children at the same time. In addition, Caritas sent $105,000 worth of medical supplies and basic medicines to the Gang-Nam People’s Hospital in North Hwanghae. Caritas also works with WFP in paying people 2 kilograms of flour a day to work on irrigation systems that prevented floods and increased agricultural production.

Caritas Korea is responsible for Caritas Internationalis’ DPRK programme. Caritas will continue to support vulnerable people in North Korea, especially children, the elderly and pregnant women, according to need.