In southern Haiti mothers are at the heart of development strategy 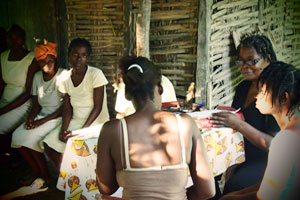 Food security, especially that of children, is a major problem in Haiti. Caritas has put in place various initiatives in the province of Les Cayes in southern Haiti to deal with this issue. With the help of CRS, the local Caritas has set up more than 200 mothers groups. What’s a mothers group?

“As the name suggests, it’s a group of mothers from a particular district with whom local Caritas workers develop activities in order to improve families’ food security and living conditions,” explains Jean Harry Dominique, the CRS agricultural projects coordinator for the region. To get a better idea, we joined him on a field trip to Roche-à-Bateau.

“I’d like to set up a small business selling rice, flour an sugar. The last time I made a decent profit. I’ve asked for 1,000 gourdes (US$25) to buy products.” Ariette Tessono is speaking. She belongs to a mothers group in the district of Labiche and when we arrive the ten or so women members are having a meeting. They’re discussing allocation of micro-loans in the context of the solidarity credit union, an initiative set up by the project.

What are the loans used for? Like Ariette, many women use the money to set up small commercial activities, thereby significantly increasing their incomes. Other women told us that these loans can also serve as a lifeline when a problem arises. “A child may become seriously ill,” explains Janice, the credit union’s treasurer. “In this case the family can then pay for transportation to hospital and the necessary medicines to treat the child.”

On average, loans last for four months and are gradually repaid over that period. The mothers group in the Labiche district calls itself the “stick togethers”. “This name explains their mutual solidarity,” explains Janice. “The mothers groups are also a way of binding together our community in order to deal with the problems we’re facing.”

The female members of the mothers groups also take part in training courses on farming techniques so that they can tend vegetable gardens. “Thanks to the training received by the agronomist Natasha, I now have a beautiful garden with red peppers,” says Jaunasse, one of Labiche’s “stick togethers”, with pride. “Selling the produce at the market brings in enough income for my family to eat well, as well as to pay for school uniforms and educational material and the children’s schooling.” 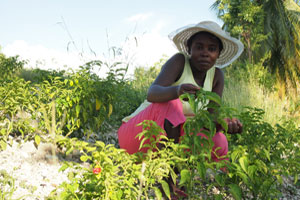 Ariette Tessono and her garden.
Credit:Worms/Caritas

Today, 950 gardens are tended in the region. Ariette Tessono invites us to visit hers. After a swift climb up into the hills, we reach her house. At the back there’s a garden where carrots, cabbages and peppers are grown. She tells us she’ll soon be able to harvest her crops and hopes to obtain seeds for other varieties of vegetables to diversify her production. “My family and I eat some of the vegetables we grow. The rest are sold at the market. This makes it easier for us to repay the loans we’ve taken out with the solidarity credit union and to deal with any unforeseen events, which was very difficult in the past. Preparing the plot of land was very hard, but now we’re reaping the fruits of our labours.”

The awareness of the women who participate in this programme is also raised regarding issues affecting the health of their families, the environment and their community. Childbirths now take place in a health centre and are thus safer for the mothers and their new-born babies. Children’s nutrition is monitored every month and those with nutritional problems are referred to the health centre and benefit from medical follow-up.

Finally, to deal with the problem of soil erosion communities are invited to take part in a reforestation programme. Caritas Les Cayes has a nursery where fruit trees are grown amongst others, which will help support conservation of the environment whilst also bolstering the food security of the population to some extent.

This integrated development approach, aimed at dealing with several issues at the same time, has produced good results. But in this farming region, which is highly exposed to the vagaries of the climate, a lot still needs to be done to significantly reduce food insecurity. Once again this year, 44,000 pupils will rely on Caritas and CRS to provide them with one meal per day.