Keeping cholera in check in Haiti 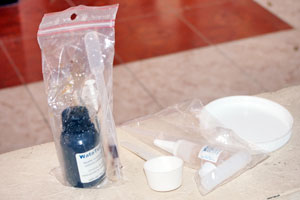 Caritas distributed more than 170,000 water purification like this one to prevent the spread of cholera
Credits: Worms/Caritas

“When the cholera epidemic broke out in October 2010, we weren’t prepared for it. We were unfamiliar with this disease, and during the first few weeks a large number of sick people came in to see us. Things weren’t easy.” Josèphe Gerda is the head of a small healthcare centre in the remote village of Brunette, in the province of Artibonite, in the diocese of Gonaïves in Haiti.

Caritas Gonaïves runs nine clinics like this one and one hospital. The clinics are the only points of access to healthcare for people in the area. “At the height of the epidemic in November 2010, more than 20 sick people might show up on any one day,” said Dr Renald Gédéon, head of the healthcare department at Caritas Gonaïves.

Piard Jean Rico, project coordinator at Caritas Gonaïves, said, “At the outset, we weren’t aware it was cholera. We only knew it was a fast spreading illness that could kill people within a few hours. We only found out what it was one week after the epidemic broke out. The staff at healthcare centres were afraid of this highly contagious disease. Luckily, we were able to rely on rapid mobilisation by our Caritas network partners.”

In this Haitian province that is frequently affected by hurricanes and flooding, access to potable water is limited and sanitation facilities are almost non-existent. This explains why the cholera epidemic spread so rapidly in the diocese of Gonaïves. In dealing with the outbreak, the local Caritas benefited from the support of CRS (Catholic Relief Services is a US Caritas member) from the outset. More than 170,000 water purification tablets, hand soap, antibiotics and rehydration salts for the sick were distributed. Several special beds for cholera patients were also sent out to the area’s various health centres. Tents were pitched to accommodate and treat those with cholera without endangering other patients. Staff were boosted with additional nurses.

Caritas Haiti and Caritas Spain drew up a wide-reaching awareness-raising programme. “As many people as possible had to be told how to protect themselves from contagion,” said Fr Wilder, the director of Caritas Gonaïves. “We trained several dozen assistants to go from door to door to educate families on hygiene. We also mobilised parish priests to take part in this educational programme.” 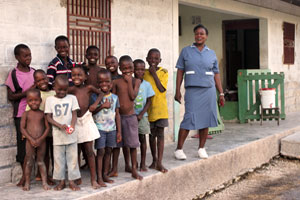 Josèphe Gerda and school children in the courtyard of the clinic in Brunette. “The number of cholera cases has gone down,” she says.
Credit:Worms/Caritas

“Access to potable water, adequate sanitation facilities and basic hygiene measures are vital elements in fighting the spread of cholera,” said Dr Gédéon. With support from Caritas Switzerland, Caritas Gonaïves distributed 7,000 hygiene kits as well as the wherewithal to enable 7,500 families to purify their water for a three-month period.

In one year throughout the country, cholera resulted in 6,700 deaths and affected almost 500,000 people. In October 2011, according to the Haitian government, 22,000 new cases and more than 200 deaths were reported. Therefore, cholera is still present in Haiti and continues to threaten the population.

The Caritas network remains vigilant and is working to find lasting solutions to the problem. In the province of Artibonite, Caritas Switzerland funded training of local Caritas staff in the use of kits to disinfect water, surface areas, clothes and food. 1,350 water filters will be installed in the region, while Caritas Italy and SCIAF (Caritas Scotland) will supply latrines to a dozen parishes and collect water from ten springs for treatment.

Children from the nearby school are playing around Josèphe Gerda in the courtyard of the clinic in Brunette. “The number of cholera cases has gone down,” she says. “This allows us to focus more on other health problems, such as the malnutrition that afflicts many children, malaria and seasonal fevers. Now we know what to do if another cholera spike were to occur. We have stocks of serum to provide rapid treatment for any new cases. The disease is still present and we’re on our guard, but thanks to the Caritas network we’re better prepared.”

At the cholera treatment centre at Alma Mater Hospital, which is run by Caritas Gonaïves, 6,000 patients were treated in one year and 53 deaths were registered.