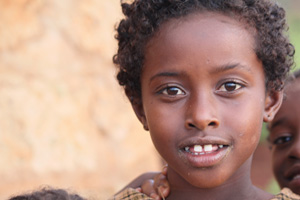 A child living in a troubled area of northern Kenya where conflict often breaks out between rival tribes. Caritas runs peacebuilding programmes to ease tensions among the area’s ethnic groups.
Credits: Laura Sheahen/Caritas

When a severe drought struck East Africa and dried up crops, Mwinzi and other settled farmers couldn’t earn enough from their land. Mwinzi had to go searching for work while his wife begged from neighbours. But some of the farmers had livestock, and there was still a little grass for animals to eat—more than in the arid northeast of the country. Nomadic herdsmen from that area walked hundreds of kilometres to reach Mwinzi’s village.

“The herdsmen used guns. We used bows with poisoned arrows. We mixed sap to make the poison,” says Mwinzi. The two hungry, exhausted groups fought each other. Eventually some villagers were killed and others driven from their homes. Women were raped and houses burned.

“I ran 10 kilometres with my children to escape,” says Grace Mutei, a mother of six. Three of her neighbours’ homes were burned down; her father’s was looted and burned. “We slept in the bush. There are snakes and so many animals there. And hyenas.” The hyenas were drawn by the herdsmen’s dying goats.

“We’re not sure when we can go back,” she continues. For now, she’s renting land elsewhere.

Natural disasters like drought can pit neighbours and countrymen against each other, with dire results. When Caritas intervenes, it can save people not only from hunger, but also violence.

As the drought worsened in summer 2011, Caritas distributed emergency food and water in many areas of Kenya, Ethiopia, and neighbouring countries. Caritas also developed water projects that brought together people from previously warring tribes. In an area of northern Kenya called Marsabit, two ethnic groups who traditionally fight over dwindling resources worked on a water pan they could both use. Caritas paid them for their work, and when it was finished, the two groups celebrated together.

In Mwinzi’s village, Caritas paid people to dig irrigation trenches to capture the little water that did fall. When the rains finally returned in October 2011, farmers planted Caritas seeds and watched in satisfaction as they grew.

In the north, where nomadic families make a living from livestock and do not farm, Caritas gave herdsmen hay and helped them re-stock their flocks after losing animals to starvation. Less desperate, the herdsmen do not need to travel into farming territory to find pasture for their goats and cows.

By helping farmers and herdsmen help themselves, Caritas hopes to build communities that are more peaceful. “When Caritas heard, they rushed to help,” says Mwinzi. “We had no food to eat, nothing. Caritas came at the right time.”