Kenyan students back to school after East Africa drought 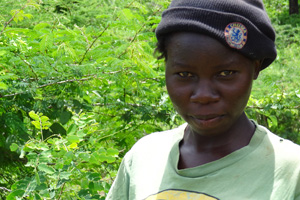 Alice Thaara, age 21, had to drop out of college after a drought made it impossible for her family to harvest their crops. During the drought, many other students left school as well.
Credits: Laura Sheahen/Caritas

Alice had always been first in her class as a child, but now she kept getting kicked out of secondary school. “Every time people were sent home for lack of school fees, my name was on the list,” she says. “I was ashamed.”

Education in Kenya is technically free, but in poor villages, parents are required to give a few dollars a month to pay teachers or even fix the school roof. So Alice would leave classes for a few weeks until her farming family could scrape together enough money to send her back. Then she’d struggle to catch up. “I had to work harder,” she remembers. “I didn’t sleep very much.”

In fits and starts, she managed what seemed to be impossible for a village child whose parents never went to school: she was accepted into a university.

“I studied organic chemistry and math,” she says. “I tested organic compounds.”

One semester at the college cost 700 dollars, and one semester was all Alice had. Then a drought that slowly and efficiently killed off crops and livestock throughout East Africa ended her plans for school.

“If there had been a harvest for the past few years, I might have been able to stay in school,” Alice says. But there wasn’t.

Like thousands of young students in drought-stricken areas, Alice had to put her education on hold. “Before, people would sell an animal to pay for school fees,” says Maurice Savei, who works for Caritas in southern Kenya. “But people’s animals started to die off.”

In some cases, parents didn’t owe fees, but their children still stopped going to school. They couldn’t concentrate on their lessons. “If someone is hungry, their mind is ringing food,” says one farmer.

In the town of Marasabit in northern Kenya, a widow named Zeinabu Eisimfecha had to take some of her children out of school as she watched her goats die off. At a nearby primary school, bones of starved buffalo and other animals lie near the classrooms. “Many kids left school because of hunger,” says head teacher David Madere.

In Ethiopia, Kenya, and other East African countries, Caritas began working with local churches to distribute emergency food like beans and rice. Caritas also paid villagers to build dams, irrigation canals, and other water systems to capture the little rain that did fall in summer 2011. With the money they earned from the construction projects, parents could pay school fees. And with food in their stomachs, children could walk to school and pay attention in class.

Caritas also added to the food that the Kenya government sometimes gives children at school. “Caritas gives students here porridge in the morning,” says Madere. “It supplements the lunch the government gives them at noon.”

“The children sometimes don’t get any food at home,” he goes on. “So the Caritas food is important.”

“In August 2011, there was higher attendance in schools that had feeding programmes,” says Angela Muchai of Caritas Kenya. “It’s the one good thing to come of the drought.”

Alice earned money working on a Caritas dam near her village, and came up with the idea to cook and sell lunch to other workers at the dam. But she is still a long way from returning to college. “I thought I’d be somewhere else now,” she says quietly, looking away.

Younger students, however, are returning to school. “Two of my children had to drop out. Now they’re back in school,” says the widowed Zeinabu, who received food for herself and her seven children from Caritas. “They’re very happy that they are back. They’ve promised to work hard,” she smiles, “so that one day they can help me out of my problems.”