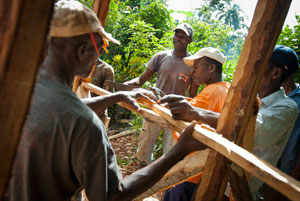 Putting people at the centre of the process of rebuilding their homes and enabling them to strengthen social and economic ties in their community helps people to recover their dignity and gives them a feeling of “finally being back home”.
Credits: Secours Catholique

Cap Rouge, a small town in a remote rural area, is perched on a humid plateau around 10 kilometres from Jacmel, which is considered to be the major town in south-eastern Haiti.

After the earthquake in January 2010, VEDEK, a farmers’ organisation that is very active in the area, counted more than 500 damaged houses there, of which half had been completely destroyed. Therefore, VEDEK and PAPDA (Haitian Platform to Advocate Alternative Development) set up an extensive project to rebuild 100 houses and 20 cisterns in order to restore water access to affected households. The project was based on the expertise of CRAterre, an organisation specialising in the reconstruction and rehabilitation of traditional houses. Secours Catholique and CRaterre are joint signatories of a manifesto advocating the promotion of local building practices as a response to reconstruction programmes.

One of the project’s key phases is the training of local craftsmen, bricklayers and carpenters, which enables promotion and introduction of construction techniques that improve the resistance of local buildings to the natural hazards the area is exposed to (cyclones and earthquakes). The architectural solutions proposed are implemented using locally available know-how and raw materials.

Paying attention to affordability issues, in order to enable replication on a large scale

The project ensures that budgets invested in reconstruction regenerate income, thus guaranteeing maximum impact on the economy and local development.

Families contribute to the works by providing basis local materials, such as sand or stones, and participate in remuneration of the workforce. They are fully involved in implementing the project as they choose their craftsmen and decide with them on how the house will be built. Each construction site is unique and respects local traditional architecture.

Thirty-six artisan builders and carpenters were trained in these new construction techniques. Twenty-seven households can now benefit from their rehabilitated homes. For more than a year, these families lived in extremely precarious conditions in damaged houses patched up with plastic, sheet metal, planks of wood, etc. Today, their living conditions (housing and sanitation) are greatly improved.

Putting people at the centre of the process of rebuilding their homes and enabling them to strengthen social and economic ties in their community helps people to recover their dignity and gives them a feeling of “finally being back home”.