Schools reopen in Haiti after 2010 Earthquake 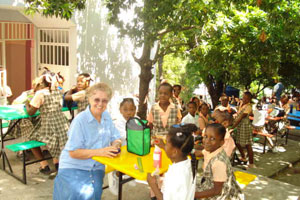 “When the school collapsed, what was essential was finding the children. The rest was just material,” said Sr. Josette Drouinaud of the Mère Delia Institute for primary and secondary school girls in the bustling Delmas neighbourhood of the Port-au-Prince.

When the earthquake of 12 January struck Haiti, the primary school crumbled. The students had finished classes for the day thankfully and none were inside the building. A flood of parents arrived at the collapsed school to make sure the Sisters had survived. “They were worried about us, as well,” she said.

By March, the primary school had managed to re-open by sharing space with the secondary school, improvising classes under trees in the schoolyard and eventually installing large tents that house up to 70 students at a time.

The girls have found comfort in being back in this environment, gleefully giggling around the schoolyard during their lunch break. But the Sisters also knew that the students would not benefit from a proper education until they were back in real classrooms.

That is why Development and Peace committed Canadian $360,000 towards the construction of the school with two floors and 20 classrooms. Job done, the new school was inaugurated in November 2011.

The school has been built on the site of the Mother Superior’s house, which also collapsed during the quake. For Sr. Drouinaud said it was more important to use the space for the new school.

“This neighbourhood has children from all social classes. Parents want to give their children a quality education and want to have the opportunity to send their children here. We wanted to make the school bigger to make sure they have that opportunity,” she said.

“What had struck me when I had visited the school was the sense of calm, and even joy, that permeated the atmosphere, said Kelly Di Domenico of Development and Peace. “The girls had a respite from the trauma that they lived on a daily basis, instead focusing on learning and envisioning a better future for themselves and their beloved Haiti.”