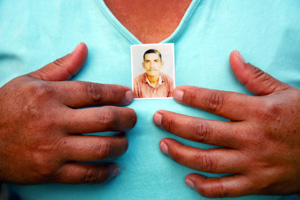 Martha Julia Lopez holds a picture of her dead husband, Seriseo Munoz, close to her heart. Seriseo (50), was shot dead last year when gunmen, hired by a rich landowner, opened fire on a group of farmers as they worked in a land dispute.
Credits: David Stephenson/Trócaire

Which country has the highest murder rate in the world? Congo, Somalia, Afghanistan?

With 82.1 murders for every 100,000 inhabitants, Honduras has now has more than eight times the average number of killings in the world.

Homicides have doubled in the last five years nationally and the regions of Cortés, Atlántida and Colón see more than 100 murders for every 100,000 inhabitants.

Poverty is responsible for lower quality of life for Hondurans. It impacts on the increasing number of robberies and crimes on commission. Murders and violence over land disputes are common.

The maras or drug gangs are responsible for many of the killings. Although Honduras is not a main drug producer in the region, it has become the most important stopover for drug trafficking by plane from South America to North America. Slayings are a result of battles with rival gangs. Codes of honour require new recruits kill before they are admitted.

Firearms account for 85 percent of the deaths. Each person can legally register five guns.

The police and authorities are unable to control the gang violence says Caritas. Fr Cálix says furthermore that there is a weak government, with little action on corruption or crime.

“There is a need for an institutional environment in the country,” said Fr Cálix. “Each citizen must feel himself as a part of a system. In a country with not enough strength, people start to solve certain issues with their own hands.”

Ex Security Minister Oscar Álvarez declared a campaign of reforming the police from corruption with a “Special Law for Cleansing of the National Police”. But he was removed from office in September 2011 with all of his team.

Caritas is deeply concerned about these violent deaths in Honduras and its Central American neighbours of Guatemala, Belize and El Salvador.

The Caritas and the Catholic Church in Honduras is convinced that it is possible to break the circle of violence in Honduras. They have restarted a popular campaign called ‘Thou shall not kill’ aimed at reaffirming the value of life and human dignity.

Fr Cálix said, “Caritas Honduras has been working in this area for the last five years. Its first campaign in 2007 sought even at the time, to promote the culture of life.”

Caritas is calling for a general disarmament, the an anti-corruption drive in the national police and army and the establishment of a policy against impunity.

Caritas is also supporting a process of reconciliation in many communities, creating open forums for the community.

Caritas Honduras has received a strong support from Caritas Norway. “This has strengthened the relevant campaign to raise public awareness for violence prevention” Fr Cálix said.