A future for Congo’s women 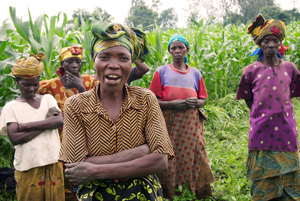 Marie-Josée (center), a beneficiary of Caritas project for the reintegration of women victims of war
Credits: Worms/Caritas

“Karibu, welcome,” said Adèle. She and a dozen other women are hard at work in a field beside the Goma to Rutshuru Road in North Kivu, eastern Democratic Republic of Congo. Adèle is an agronomist and also heads three associations supported by a Caritas project to rehabilitate women war victims.

“We’ve planted peanut seeds and we’re in the process of taking out the weeds so they don’t overrun the place,” she said. “When Caritas launched the project, 60 women were involved. We were given peanut, bean and pea seeds. After the first harvests we bought some maize seeds. Look at what they’ve turned into. We have two hectares of fine maize that we’ll soon be able to harvest.”

Marie-José is one of the women who have benefited. “When I joined the association, I wasn’t in very good shape,” she said. “My husband had been killed and all our property had been stolen. I was disheartened and confused. My children were hungry and each day it was very hard to find enough to eat.”

Conflict in Congo over the last ten years has been one of the worst humanitarian crises in living memory. The death toll is in the millions. The fighting is officially over (though attacks by armed groups continue and lawlessness remains an acute problem).

There are still more than 1.7 million people unable to go home because of violence, whether it’s caused by ethnic rivalries or competition over land and resources. Caritas says women are particularly vulnerable when they leave their homes due to conflict. Rape was used frequently as a weapon of war in Congo and sexual violence remains at endemic levels.

And for those women like Marie-José returning to their homes after being forced to flee, they need help to restart their lives.

“At the beginning, I came to the project to be with other women and shared my sorrow. It was obvious that I couldn’t carry on like that,” said Marie-José. “Caritas gave me a goat and some seeds. That marked a fresh start for me. When the goat gave birth to a kid, I was able to sell it and earn a little money for my family. After the first harvests it was easier to feed my children.”

Adèle gives training courses on farming techniques to women like Marie-José. Her husband, Chiza Adeadatus, is in charge of literacy courses for them. “Twice a week, 47 women attend a reading and writing class. The courses last three months, and now some of the women have asked to take French lessons,” he said. “When we went to vote, you should have seen how proud my students were to be able to sign their names in the register without any problems.”

Justin Mafuko is a North Kivu field project manager. He said, “We encourage the women to set up seed banks. Part of the income they receive from harvesting their crops must be allocated for purchasing seeds for the next crop or for improvement of the associations’ production tools. We have also set up mills that enable the women to grind their cereal crops at very low cost. They sell the milled flours and with the profits they’re able to buy new seed varieties to diversify their production. They can also decide to increase the number of goats in their herds.”

Up the road in Kibumba, Marceline is in one of the mills in the middle of a cloud of dust. Together with Zamoukunda and Bélise, she’s preparing sorghum flour, a local cereal product. “With the flour we prepare fufu (a dough made from boiled and pounded flour), which we then sell at the market. We’re also able to prepare food for our children. I’ve got five children, and since my husband was killed I’ve been bringing them up on my own,” she said.

Peacebuilding is another important aspect of the work. “Before, there were a lot of conflicts between communities,” said Agnès, another women involved in the project. “We argued about land and always found reasons for being divided. It often ended badly in violence.

“By rubbing elbows with each other every day, we realise we aren’t that different from one another and that old beliefs about such and such a tribe are only figments of our imagination. Now when a problem crops up we discuss together to find peaceful solutions. After all, we’ve all been through the same suffering.”

Other women in the community see the benefits of taking part in the project set up by Caritas with funding from the Spanish government. Membership of the association Adèle, Marie-José and Agnès belong to has risen from 60 to 147.

“Many other women would like to join us, but we don’t have the wherewithal to increase our production capacities and be able to take them in,” said Adèle. “Our priority is to set up a drying and storage facility for the maize crop.”

Funding for the project ended in October 2011. As the associations have achieved a degree of autonomy, their activities are not directly threatened. Today, 750 people are taking part in the project in the diocese of Goma. However, finding new donors would enable other female war victims to benefit from the positive impact of the programme in their lives.