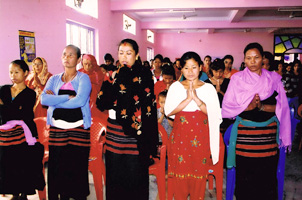 To mark the launch of a new Caritas report on the female face of migration, communications officer Laura Sheahen and photographer Katie Orlinsky travelled to Nepal to document the trafficking of young girls and women. Follow their journey.
By Laura Sheahen

“We girls were hidden under floorboards during police raids. There were ten girls there — it was so cramped you couldn’t breathe.” Rekha* was fourteen when she left her homeland of Nepal for India, saying yes when a friend’s mother offered her domestic work abroad. But when Rekha reached India, there was no maid job. Instead, she found herself in a dark room with many other girls. “I cried a lot. I didn’t even know how to speak Hindi,” she remembers. “I met another Nepalese girl, and she said, ‘They’ve sold you.’”

Over the course of 18 months, Rekha was sold into three different brothels. In the last one, she convinced a client to let her use his cell phone—and told the police about the hiding place under the floor. When the police arrived, Rekha and 24 other girls were freed.

Many young Nepalese women aren’t. Trapped in brothels, they work for years as prostitutes to make money for owners who buy and sell them. They’re often beaten and sometimes drugged. “There are henchmen hanging around to catch any prostitute who tries to escape,” says Priti Patkar, who runs rehabilitation programmes for trafficked women in Mumbai, India.

Some of the girls barely speak when they arrive at government shelters after raids. “At the shelter, I was scared of everything and everyone,” says Rekha.

“Everyone had cheated me. I thought, ‘What if these women also sell me somewhere?’”

But gradually they do learn to trust. With help from Caritas and other groups, they receive psychosocial support, legal help if they choose to prosecute the people who sold them, and job training.

In one Mumbai shelter partially funded by a Caritas member, 20 young women sit on the floor sorting herbs as part of their catering training. They talk about movie stars and the dance routine they’re planning for an upcoming competition. They seem like regular, happy teens, not girls who have been to hell and back.

In Nepal, Caritas works to prevent at-risk young women from falling victim to traffickers. Holding awareness-raising sessions in villages, broadcasting information via radio, and offering livelihood options closer to home, Caritas strives to protect vulnerable women. At the United Nations and with other groups, Caritas Internationalis is fighting for laws that will safeguard migrant women.

Rekha is married now; she met her husband in the Mumbai clothing store where she got a job after finishing a Caritas-funded course in fashion and tailoring. Before getting married, she brought him to meet the social workers who helped her, so they could check him out. “He’s very sensitive and good,” she tells me. “He always says he doesn’t want to see me sad.”

*Name has been changed

–Adapted from an article originally published in BustedHalo.com. Used with permission.