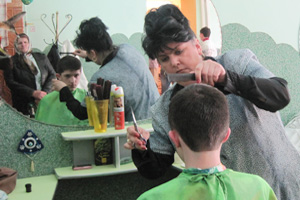 Oxana in a beauty salon in Drohobych, in the L’viv region of Ukraine
Credits: Caritas Ukraine

“Life abroad is very difficult at first,” says Oxana (real name redacted). “I wanted to return to Ukraine for a long time, practically from the moment I got to Belgium.”

Oxana had left Ukraine to join her husband. He had gone to Brussels to look for work after being made redundant and with the lack of job opportunities at home.

“At that time my income was very poor and my closest family members died,” she said. “I decided I had to make sure I didn’t lose my husband as well. I joined him in Belgium within a year.”

He worked as a labourer despite his two degrees, she worked cleaning an elderly woman’s house and cutting hair for other migrants (she is a professional hairdresser).

“The pay was pretty low, but I couldn’t complain as I was working illegally. Somehow we made ends meet,” she says of the 10 years they spent in Belgium.

A recent study by the Institute of Ethnology, the National Academy of Sciences of Ukraine and Caritas Ukraine shows that eight out of ten Ukrainian migrants wish to return home either because they have families there or that’s where they see their future.

Caritas Ukraine migration officer Rostyslav Kis’ says ,“Our work experience shows that most migrants are reluctant to return home if they haven’t accomplished what they set out to do abroad: save up money to buy a home, to cover their children’s studies or for medical treatment.”

Oxana was one of those who wished to go back. She was homesick. The language barrier and the fear of being caught and punished for living and working illegally in Belgium made life difficult and stressful.

“When I heard a hairdresser’s position had opened up in my native city I thought that God must have orchestrated this opportunity,” she said. “But how could I leave Belgium and not be forbidden from travelling abroad at a later date. It seemed impossible.”

Experts believe that improving the process of returning migrants home can become a positive factor of their repatriation. The ERSO (European Reintegration Support Organisations) network is supported among other by Caritas to help achieve that.

In 2008, ERSO looked at the repatriation of Ukrainian migrants, Caritas administered the project. It created a Ukrainian solidarity network of 30 organisations. This network provided social, informational, and psychological support, along with legal and material assistance to Ukrainian migrants who wanted to return home.

In the first year alone, this network helped to bring 163 migrants home, and provided re- integration assistance to another 25. This project ended at the beginning of 2010.

Oxana heard about Caritas and the help they gave to migrants wanting to return home. She contacted Caritas Belgium staff in Brussels. Together with colleagues from Caritas Ukraine, they helped her fill out the necessary forms and ensured Oxana had something to go back for.

Caritas Ukraine migration officers Rostyslav Kis and Iryna Brych pick up the story: “Together with Belgian colleagues, we approved the purchase of hairdressing equipment. She choose every item herself, starting from scissors to blowers. After the whole set was bought she returned back to her town to start business back again.”

Since the beginning of 2010, Caritas Ukraine has been administering the STAVR (Strengthening Tailor-made Assisted Voluntary Return) project. The project’s goal is to help the successfully re-integrated migrants who have returned from Belgium by providing them with qualified assistance.

Oxana now lives in her native Drohobych, in the L’viv region and works as a hairdresser. She has re-adjusted to the Ukrainian rhythm of life, with many problems and joys, worries and moments that warm the heart. She has already privatized her spot at the beauty salon and legalised her status as a private entrepreneur.

She has no plans to travel abroad. She is waiting for her husband to legalise his residency in Belgium so that he can return home too. She says that only Ukraine can be her home; everyplace else, however charming or annoying, profitable or unprofitable, is just not home.

“I have finally achieved personal independence; I have an identity as a citizen and an individual! I wish this for every Ukrainian. If we have freedom and self-respect then we will have a decent country” says Oxana.