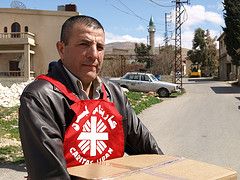 “The situation is bad,” said Fatima*. She had arrived from Syria into Lebanon that morning with five of her seven children. They’d fled from Kosayr, a suburb of Homs that’s currently undergoing heavy shelling as fighting continues between the government and opposition forces. Her husband stayed on while her teenage boys were stopped from leaving.

She and the rest of the children had walked two hours across the border. They’re staying in a bare concrete storeroom, normally used for farm equipment. The refugees brought nothing with them.

Snow still covers the mountains of the Bekaa Valley. It’s cold and windy in the remote rural border area. There are two mats on the floor of the room and a crate of empty cola bottles. There is no heating. Caritas Lebanon is carrying out an aid distribution in Bekaa and gives them a box of food, with pasta, rice, oil and other bare essentials. It should last at least a month.

Caritas staff hope their wait in the warehouse won’t be long. Fatima says they have friends in Bekaa who will be able to provide them with a place to stay, however basic.

“It is very hard to see this suffering”, says George*, a Caritas volunteer helping deliver food, blankets and heating oil to the Syrian refugees. “The Lebanese have experienced war and know what it means to have to flee our homes. If people are in need, we must help.” Some refugees came with nothing, “in our pyjamas” they say.

They tell the same stories of living under siege, destroyed homes, moving from house to house, hiding from snipers and fleeing as the shells fell. Although Bekaa is a poor rural area, the local Lebanese communities have welcomed the refugees in their homes with whatever they can share. “Several Lebanese families come together, pooling their resources to help one family,” says the Caritas volunteer. “But more is needed.”

Caritas Lebanon has already provided heaters, fuel and blankets to help against the cold winter. “Caritas plans to provide food, hygiene kits and clothes to 2500 families over the next three months as well as helping their Lebanese hosts,” says Caritas Lebanon President Fr Simon Faddoul, who took part in the Bekaa aid distribution. “Aid will go to vulnerable families, based on need,” he says.

Caritas aid will go to Christian and Muslim families. Most of the refugees are Sunni Muslim. “I was arrested three times and beaten,” says one man, who fled because he says he was being persecuted. “Sunni Muslims are being targeted,” he says. “If they try to defend themselves, they’re killed.” Christians are also under threat. “My husband was taken at a road block by revolutionary fighters on 9 February,” says Saydeh *, who fled Baba Amro, another suburb of Homs. “He was tortured for seven hours and then dumped barely alive outside his parents’ house.”

They couldn’t get access across the frontlines to a hospital, so the man died of his injuries. She says he was one of 15 Christian names the opposition had on a list. Those on the list were believed to have worked with the Syrian regime. She says others on the list were killed. “All the Christian lived in fear,” she said.

“Now, they have nearly all fled.” Her husband sent her to safety before he was killed. He said he would join her soon. Now, she must look after her two year old daughter without him. If peace returns to Syria, she will be able to return home. But for now the bombs continue to fall and refugees continue to flee.