Caritas in Mexico: Standing alongside migrants who are hostage to violence 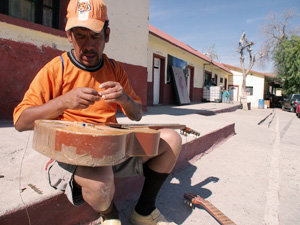 Luis Enrique has been working for over an hour on patching up the two guitars that madre Guadalupe brought him at Belen, the migrants reception home in Saltillo, North Mexico.
Credits: Worms/Caritas

“I like guitars, they’ve been with me all my life. In Honduras, my father was a well-known musician. Trying to repair these old carcasses occupies my hands and my mind.”

Luis Enrique has been working for over an hour on patching up the two guitars that madre Guadalupe brought him at Belen, the migrants reception home in Saltillo, North Mexico.

Luis Enrique arrived the previous day. He thinks about Manuel, his travelling companion. “I had told him to wait, that there was movement on the bank.”

Three days before, the two friends were on the bank of Rio Bravo, the border between Mexico and the United States. Luis Enrique knows the passage they were meant to cross well. He used it twice in the past already. Twice also, he was deported by the American migration services. He paid dear for these experiences, but now knows what you need to do to cross the border without the help of the “dealers”.

“You need to take your time, survey the land, be sure all is calm. I had told him to wait, but Manuel was too excited to be so close to the goal. He jumped in the water, and they caught him. I just managed to escape, not him.”

Manuel fell into the hands of one of the criminal gangs who share the border between themselves. These gangs make migrants pay a right of passage. Those who don’t go through these “dealers”, when they are caught by them, are taken hostage or even executed on the spot to serve as a deterrent to other migrants.

Sister Leticia Gutiérrez Valderrama is the general secretary of the migrants fellowship in the Mexican episcopal Conference. She explains the reasons for the criminal gangs’ interest in migrant trafficking: “For organised crime, migrants represent an easily accessible source of forced labour. The war between criminal gangs and government forces leads to many losses among the henchmen. Migrants are held, then tortured until they lose all judgement. They are conditioned to carry out the dirty work; murder, rape, and become in turn those who torture their migrant brothers. The fate of women is just as terrible. Female migrants who are caught are exploited in prostitution rings.”

Sister Valderrama also explains that migrants in transit are an important source of income for criminal gangs. “They must pay the right to climb onto trains, pay smugglers to cross the border. In the worst cases, they are held and compelled under torture to give contacts for their family established in the United States or back home. If the family do not pay a ransom, they are murdered.” 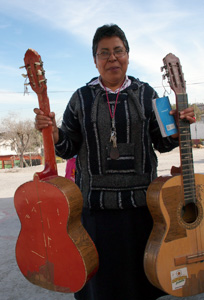 Luis Enrique has been working for over an hour on patching up the two guitars that madre Guadalupe brought him at Belen, the migrants reception home in Saltillo, North Mexico.
Credits: Worms/Caritas

That same morning, madre Guadalupe Reyes has to take a new arrival to the doctor’s. Jose Fuentes has just gone through hell. Three weeks of suffering, forced labour, torture and fear at the hands of the “Zetas“. This drug cartel is considered the most violent in Mexico. It is based in the north of the country, in the Nuevo Laredo region, on the border with the United States. Very active in the Monterrey and Saltillo area, it carries out its criminal activities in over twenty of the states of the country.

When Jose returns from his medical check-up, he sits down at a table in the courtyard of the migrants reception home in Saltillo. He has to concentrate to shell nuts. His hands shake, his entire body hurts. Just as Luis Enrique, he tries to drive away the images haunting him. “The doctor gave me painkillers. I’m better. I’m alive and safe here. Everybody cares for me, I need to regain strength. Do I go home to Honduras, or do I try again to get into the United States? In Honduras, my mother and my two young sisters are counting on me. The youngest wants to study. What should I do? ”

Jose has decided to be an anonymous witness to the Mexican Commission for the protection of human rights.

“People must know what we are forced to live through. I’m an interior decorator and there is no work in my country. That’s why I wanted to go to the United States. When I arrived in Monterrey, I found work as a decorator in a strip club. I wanted to work long enough to earn what I needed to pay for crossing the border. But I made the mistake of trusting the wrong person. She told me she knew a farm where I would be able to work for a few more weeks, and that in exchange the owner would take me safely across the border.”

The owner of the farm told Jose that he had a company that delivered furniture to the United States. Jose was to cross the border in one of these trucks. The plan was plausible, but the reality was very different.

“I worked for three weeks at the farm, without being paid, until I wanted to phone my mother to give her some news. The boss told me he would call a friend to take me to town to make the call. A 4×4 vehicle arrived with three men on board. It’s only when I saw the weapons that I understood that I was no longer a free man. They put my head under a paper bag and took me to a large house. That’s where the horror started. ”

Hostage to the “Zetas“, Jose is locked into a room in the house along with 15 other migrants. There were women among the group. They were often taken to a room on the second floor. Their screams were enough for Jose to know what they were faced with. 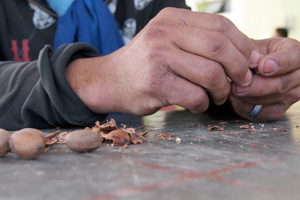 Jose Fuentes has to concentrate to shell nuts. His hands shake, his entire body hurts. He has just gone through hell. Three weeks of suffering, forced labour, torture and fear at the hands of the “Zetas”.
Credit: Worms/Caritas

“From the first day, I was beaten very hard. My abductors wanted to know if I had family in the United States. I don’t have any family on the other side of the border. For three days, they tortured me until the day when they brought us all together to show us what would happen if we didn’t give them what they wanted. A man was hanging by the arms. The abductors told us that this one didn’t have any family to contact and therefore was of no use to them. A few moments later, he was dead. Every day, we had to slave away preparing hundreds of meals without knowing who they were for. Every evening, we were beaten to remind us we no longer had any rights. ”

Jose gave the telephone number for his only friend living in Pennsylvania. The abductors contacted this friend and demanded $1000 to free Jose. Once they received the ransom, they demanded a further 1000 dollars so Jose would be freed alive. The friend paid again. A few days later, Jose and two others were freed and abandoned by the side of a desert road. They managed to reach a house where the owners gave them water, food, and alcohol to ease the pain. After two days in this house, Jose was strong enough to reach the Caritas home in Saltillo.

“I’m a free man again, I was lucky, very lucky. But I think about all those who are still prisoners. We were separated into little groups, but I think there were over a hundred migrants in that house. How is it possible that nothing is done to stop these people? We weren’t very far from the town. People and the authorities must know what is going on. ”

Criminal gangs are not the only danger that migrants must face. Private security forces responsible for the protection of trains and goods, and some representatives of the State (federal police, migration officers) also take part in exploiting the weakness of migrants. Witness accounts abound concerning exortion and physical violence incurred.

According to sister Valderrama, 20000 migrants a year disappear without trace in Mexico.