Domestic worker abuse: Battered, bruised but back in Nepal 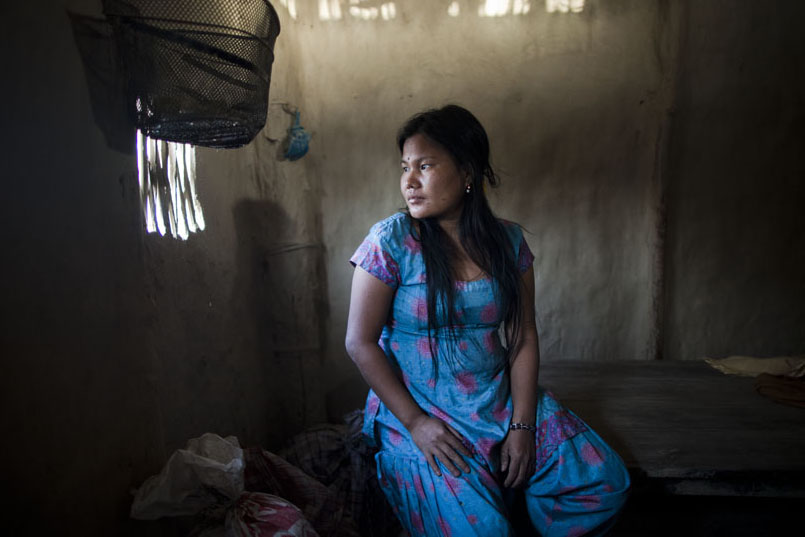 Twenty-four-year old Damber Kumari Gurung had left her village in Nepal for Saudi Arabia to work as a maid. Now she is back in Nepal after suffering abuse. Photo by Katie Orlinsky/Caritas 2012

“When I got home, my family saw my condition and cried.”

Twenty-four-year old Damber Kumari Gurung had left her village in Nepal for Saudi Arabia to work as a maid. More than a year later, she came back covered with bruises.

She’d worked long hours in a private Saudi home, getting about four hours of sleep each night as she struggled to keep up with the cooking, cleaning and washing. The family she worked for rarely paid her, and when she asked for her salary, they sent her back to the employment agents in Riyadh.

She can’t say exactly what happened next. She remembers fighting back when they tried to strip her, and ripping one of the agent’s shirts. When she arrived at the airport in Kathmandu, Nepal’s capital, she was black and blue. “I was crying bitterly. People surrounded me,” she says.

A woman at the airport asked if she needed help. Though afraid the woman might exploit her as well, Damber Kumari went with her. It turned out that the woman worked for Porukhi, an organisation that helps migrant women. Learning that the girl was from an area of eastern Nepal called Damak, Porukhi called Caritas.

“Other organisations know we work in Damak, so if they know a girl is from here, they call us,” says Rupa Rai, who runs safe migration programmes for Caritas Nepal. “It takes time to trace the house of a girl.”

Caritas is one link in a chain that reunites abused women with their families or helps them learn skills and earn money if they can’t go home.

In Nepal, unscrupulous employment agents may trick uneducated women into taking jobs like Damber Kumari’s—or, worse, may trap them in brothels. When the women get out, finding where they used to live can be difficult, especially if they are from rural areas and don’t know how to locate their hometown on a map.

Damber Kumari takes medication for a mental health problem. Because of the trauma she’d suffered and because of her mental condition, it was even harder to help her. She barely spoke.

Caritas had some facts: Rai knew Damber Kumari’s name and knew she was from a village near Damak, but didn’t know which one. “She could only say the name of a Protestant church she went to,” says Rai. “I called our office in Damak and said, ‘can you find out where this church is?’ It took three days.”

Then two Caritas social workers went to nearby areas, asking around in villages. Eventually they tracked down Deomaya, Damber Kumari’s mother, in a tiny village called Dhimal Tol. “I was really happy when Neera and Angelina came,” says Deomaya. Now that they’d found the right place, the Caritas team arranged for Damber Kumari to come home.

Damber Kumari was worried as she went back to her village. “I felt bad because I’d gone abroad to earn money, but come back in this situation,” she says. The reunion was tearful but, for Damber Kumari, silent. “At that point she wasn’t speaking at all,” says Angelina, one of the Caritas social workers. “I could see the marks all over her arms—she’d been badly beaten.”

Damber Kumari’s bruises have healed. Her mind hasn’t, but medication she now takes is helping. “She’s talking now,” says Angelina. Caritas continues to check on her, and to raise awareness in villages like hers about employment traps.

In their bare two-room hut, Damber Kumari and her family struggle to get by. But at least she is safe. “You brought my daughter back alive,” says Deomaya. “I am so grateful.”

Laura Sheahen is travelling in Nepal as part of Caritas advocacy for the rights of women migrants.