Migrants risk all to cross from Mexico to the US 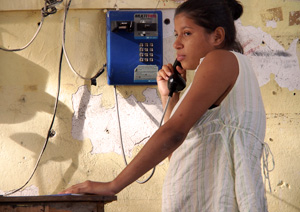 For Stefani, the wait is terrible.

It’s 8 am in a Caritas Belen reception centre in Saltillo in the north of Mexico. The city is 300 km from the United States. She is waiting for her boyfriend Onan to turn up. They were suppose to meet here, before trying to cross the border together.

Stefani is 17, a teenager from Honduras. She is seven months pregnant. “I could not travel by the train anymore,” she says. “I could not run. I could not jump on and off the trains. It was too dangerous”.

She reached Saltillo by bus along with her boyfriend’s 15 year old brother. They did not have enough money for a third ticket for Onan. He had to ride the freight train. She last saw him a week ago. “He should already have arrived”, she says.

Every year, thousands of undocumented migrants brave criminal gangs, immigration officials and the elements to hitch rides on the freight trains running from southern Mexico to the US-Mexican border. The trains are known as ‘the Beast’ or the ‘Train of Death’. Kidnappings, murder, detention and accidents are common.

Bad news travels fast along the route. “I have asked the new arrivals if they know of anything,” she says. “Perhaps there has been trouble with the immigration agents or with the train guards. But I have no word of him.”

Fear is nothing new for Stefani. She is fleeing fear. She is fleeing Honduras, which now has the highest murder rate in the world, followed closely by its Central America neighbours.

“One does not escape violence in Honduras,” she says. “I come from a nice family. We were happy at home. But as soon as I crossed door, I entered a different world. Outside, there were street gangs, prostitution, drugs and weapons. You always kept your eyes lowered.”

Her father was taken from home one evening by a gang and his dead body found dumped the next day.“There was no motive,” says Stefani. “I don’t want my baby to live through what I have had to endure.”

Madre Guadalupe Reyes is in charge of new arrivals at the Caritas reception centre in Saltillo, where they get a good meal, a safe night and some clothes. “The crossing of the country is particularly dangerous for the women,” she says. “Those who arrive are strong, very strong.” [Watch interview with Madre Guadalupe Reyes]

Tragic stories are not uncommon. But there is good news for Stefani. Onan arrives that day: “Our train was stopped twice by immigration officials,” he says. “I had to jump off and hide.”

Later Stefani telephones Onan’s mother with the good news. She also wants to know if there is word from his other two brothers. They are already in the US and are paying the “coyotes” to take them across the border. The price is between $1500 and $2000 per person, but does not guarantee success or safety.

Human smuggling is a boom business according to the UN Office on Drugs and Crime, with the profits in the billions (over $32 billion in 2005). Caritas Internationalis says that while every country has the right to regulate immigration, restrictive measures are simply encouraging people to resort to more dangerous and expensive channels of migration. Caritas says flexible immigration policies are needed instead. This would also prevent the loss of thousands of human lives.

“I left so that my family can know peace and safety, says Stefani. “But for the migrants of Central America, this voyage is too difficult, too dangerous, we only seek to survive. ”