Syrian refugees flee to Lebanon with stories of terror 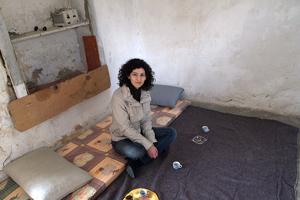 *Mohamed’s son was born a few weeks ago during the battle for Bab Amro, a suburb of the Syrian city of Homs. “The baby was delivered by a dentist,” says the father, in a makeshift clinic that previously been a neighbour’s home. “There wasn’t any medical equipment,” he says. Locals had given whatever cotton wool and bandages they could find. The dentist was mainly treating shrapnel wounds that day, but babies don’t wait for wars to end before being born.

Bab Amro has seen the worst of the conflict in Syria since an uprising began in March 2011. Life there during the siege for Mohamed, his wife, three-year old daughter and new-born son was one of daily survival. “There was bombing night and day,” says Mohamed. Water and food had run out. There was no electricity.

Mohamed would try to find water in the abandoned houses of neighbours who had already fled the fighting. Every time he left his home, he was scared. “We were afraid to even cross the road to get milk for the children because of the snipers,” he says.

As weeks passed, there were more injured people from the shelling. Mohamed says they were prevented from receiving medical treatment so he would help take them to the makeshift field hospitals set up in people’s homes. He remembers helping about 50 injured people.

It was dangerous to leave his family unprotected. But he had to help. When shells hit his neighbour’s house one night, he went out to see what he could do. When he returned after midnight, his wife, his daughter and his boy were gone. A witness said unidentified armed men had entered the house, killed them inside and taken away their bodies.

Mohamed tracked their remains down. Their bodies were mutilated, their throats cut, and their faces hacked to pieces. He identified them because he recognised a scar on his one-month old boy’s arm. He buried them in a garden near a mosque, found his wife’s parents and escaped Baba Amro with them that night.

Mohamed arrived four days ago to the Bekaa in Lebanon. He crossed the border illegally after he was refused entry. He came with nothing, “not even a box of cigarettes”. He is being looked after by a Lebanese man, a Sunni like himself, although the area is predominately Shiite.

“We’re helping as best we can,” says the Lebanese man. “But everyone who comes needs help. The Syrians are coming here in a bad condition. There’s been no work there for a year. There’s no food in the areas affected by the conflict. Some of the refugees need medical help.”

The Bekaa Valley is poor and the families there are struggling themselves to make ends meet. They offer all they can. Mohamed is sharing a tiny room with three other families. The walls are bare, cracked concrete. The floor is hard and cold. There are some mats to sleep on. There is no heating against the cold winter nights.

According to locals, every Sunni Lebanese family in this town is hosting at least one Syrian family.

Mohamed breaks off the interview. He must hurry for a job interview. He was a horse breeder in Syria. Explaining what has happened to his murdered family, he says, “It is war. There are no rules.”

After he leaves, his friends said he hasn’t accepted the death of his family. They say “he’s out of his mind with grief. It’s been too sudden. He’s still in shock.” They’re worried that he will commit suicide. They’re trying to alleviate his suffering, but don’t know how.

Caritas social worker Bernadette is trying to help Syrian refugees in the area. She says every Syrian refugee family she met has experienced some kind of trauma. She says they’re frightened, hungry and in need of basic things like something to wash with or to sleep in.

“Every day, the numbers increase,” she says. And so does the need. There are 7000 Syrians registered as refugees in Lebanon, but Caritas estimates the real figure is much higher, around 26,000 people. “They’re mostly too frightened to register,” she says.

Caritas Lebanon has already started to help families in Bekaa with electric heaters, wool blankets, bed sheets, clothes and other items. They plan to help about 4000 families for three months with the support of Catholics from around the world through the Caritas confederation.

They’ll provide some medical treatment through two mobile clinics, focusing on pediatric and gynecological care, areas not covered by other aid agencies. They provide counseling and trauma care too.

Mohamed says his first priority is trying to get his wife’s family out of Syria. He’s not alone. The numbers of refugees increase day by day as people flee the conflict. With no end in sight to the conflict, the needs of the Syrian refugees and the Lebanese who are helping them will only become more acute.