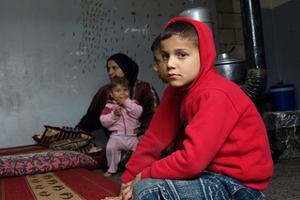 An uprising against the Syrian government and the President Bashar al-Assad has left 9000 people dead since fighting broke out in March 2011.

Tens of thousands of people have fled their homes. Many have sought safety in neighbouring countries such as Jordan, Lebanon and Turkey, others remain in Syria.

Conditions within Syria and for the refugees who have fled are bleak. They need food, shelter and medical assistance. Children need educational support and adults don’t have access to employment.

Caritas staff members are providing aid both within Syria and to those refugees who have fled in Jordan and Lebanon. Caritas Turkey is also willing to respond.

Pope Benedict’s Holy Thursday Mass collection went to Caritas Syria for humanitarian assistance to Syrian’s forced from their homes because of the conflict.

“Particularly in Syria, may there be an end to bloodshed and an immediate commitment to the path of respect, dialogue and reconciliation, as called for by the international community,” the Pope said during his Easter message.

Caritas Syria is assisting the Syrian population without distinction on grounds of politics or religion, in particular in the areas of Damascus, Homs and Aleppo.

Meanwhile, Caritas is working with in Lebanon and Jordan with refugees to provide food, hygiene items, oil for heating and counselling.

Many are staying with friends and family, some are staying in relief camps and community shelters such as old school buildings.

Caritas social workers say many of the refugees tell harrowing stories of living through daily shelling, of extrajudicial killings and terrible suffering.

Over 12,000 Syrian refugees have registered in Jordan, though the real figure is estimated to be 30,000 people

Caritas Jordan is working with the UN refugee agency UNHCR to distribute aid to refugees in Mafraq and Ramtha.

Caritas Lebanon is delivering aid in Beirut, Bekaa and Wadi Khaled on the border with Syria.

Caritas social workers, assisted by Caritas Lebanon’s volunteers, are still on the field doing needs assessments in Beirut and in the Bekaa, and keep distributing food parcels, blankets and bed sheets for those in need.

But international appeals for support have so far fallen short and more funds are required to meet the needs of the refugees.