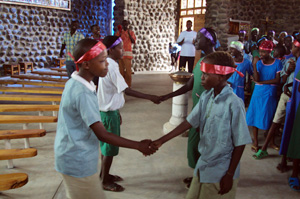 At a peacebuilding camp in northern Kenya, children from rival tribes play games to build trust.
Credits: Diocese of Marsabit

Catholic leaders from some of the world’s worst conflict zones will gather in Rome on May 29 and 30 to discuss ways to make peace. Participants representing Nigeria, Sri Lanka, Uganda, Somalia, the Democratic Republic of Congo, and other hotspots will attend “New Challenges for Catholic Peacebuilding” to share methods that defuse violence and reconcile warring groups.

“In South Sudan, the Philippines, and Congo, in the Middle East and Central America, the Catholic Church is a powerful force for justice and reconciliation,” says Cardinal Peter Turkson, President of the Pontifical Council for Justice and Peace, who is leading the meeting. “But this impressive and courageous peacebuilding often remains unknown, underanalyzed and unappreciated.”

“We all hear about the bombs,” says Michel Roy, Secretary General of Caritas Internationalis. “But much of our reconciliation efforts are related to longstanding internal situations of oppression and injustice.”

Anticipating the 50th anniversary of Pope John XXIII’s encyclical Pacem in terris, the seminar will analyze the best practices of contemporary Catholic peacebuilding as carried out in places where hatred has led to mass killings and destruction.

The seminar has been organized by the Catholic Peacebuilding Network, the Pontifical Council for Justice and Peace, and Caritas Internationalis, in collaboration with several major Catholic organisations. It is informed by the grassroots successes of Catholic efforts worldwide, as well as by the work of the USA-based Kroc Institute for International Peace Studies at the University of Notre Dame. “In considering lessons learned as Catholic peacemakers, we need to look at significant changes in a complex world,” says Gerard Powers of the Kroc Institute.

“Pacem in terris remains a living teaching,” says Father Pierre Cibambo of Caritas Internationalis. “Situations of violence and terrorism have changed over the past 50 years, but the will and the ability to build peace remains.”