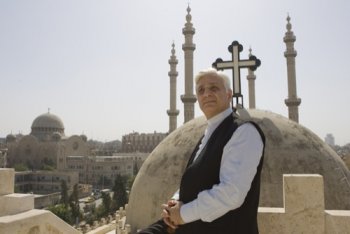 Bishop Audo at his church in Aleppo in October 2009.Matthieu Alexandre/Secours Catholique

Chaldean Catholic Bishop Antoine Audo of Aleppo in Syria and head of Caritas Syria has been in France for meetings with Secours Catholique (Caritas France).  He spoke to François Tcherkessoff.  Here is an edited version of the interview (translated by Caritas Internationalis).

What does the Church leadership say about the recent events?

The three patriarchs of Damascus from the Catholic, Greek Orthodox and Syrian churches urge dialogue, an end to the violence, a reform of the State to allow greater freedom, democratic elections. Some Christians fear the unknown with the possible rise of religious fundamentalism as in Libya, Tunisia and Egypt and so defend the regime.

What is the feeling among Muslims?

The problem is that outside interference wants to exploit a sectarian conflict between the Sunni majority who want power and an Alawite minority currently in power. But of course Muslims also call for peace.

How many people have been forced from their homes?

The city of Homs is the most affected. Out of its 1.1 million population, only 300,000 remain following the shelling and fighting. 800,000 people have left the city including 90,000 Christians. They’ve mostly gone to nearby villages to stay with family. Many others have left for Damascus, Aleppo and Lebanon.

How is Caritas helping?

The economic crisis caused by the events has affected us in Aleppo. The cost of living has nearly doubled, creating unemployment and poverty.

A programme is underway in Aleppo for 400 families. Caritas focuses its efforts on three priorities: health, rent, tuition. Caritas is supporting the people by providing medical care such as help with the purchase of medicine, with school fees and looking after the elderly. After a car bomb went off in a Christian neighbourhood killing two people, Caritas helped 50 families repair their homes.

We receive financial support from the European Caritas organisation and from Catholic Relief Services (CRS is a Caritas North America member).

Who is responsible for the reported human rights abuses?

I reserve judgement. In a crisis, truth is always at risk.

Is there a solution to end the civil war?

We must take the path of dialogue, we must address the sectarian tensions of the conflict and overcome them peacefully so they are not a cause for civil war. There is a need for political reform and freedom of the press. After 50 years of military rule, it will take time.

All I want is that any political transition that takes place does so peacefully, without massacres. I do not know what will happen but I cannot imagine the extent of a civil war between Sunnis and Alawites.

Bishop Audo is in Rome next week for a meeting of the R.O.A.C.O. (“Riunione Opere Aiuto Chiese Orientali or “Reunion of Aid Agencies for the Oriental Churches”).