Migrants brave deserts and shipwrecks to reach safety in Italy 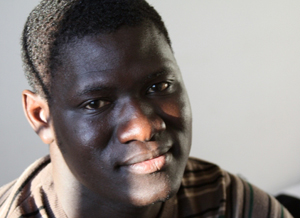 Moussa fled political violence in his West African homeland, making a dangerous journey through the desert and across the Mediterranean to reach Italy.
Credits: Caritas

“When we walked through the desert, we saw many corpses. I’d see the bodies and walk around them.” Moussa was 14 when he fled his homeland of Guinea and spent two weeks making his way through the desert of northwest Africa, hoping to reach Europe. “Every day, I thought, ‘Maybe I’ll be dead tomorrow.’”

Moussa’s family was killed when political violence engulfed his west African country: “my mother, father, and little brother went to sell vegetables in the market and were shot.” Orphaned, Moussa realized his only chance for survival was escape. “I knew there was a risk of dying on the journey,” he says, but staying in Guinea seemed like certain death.

With two dozen other people and a guide, he walked for days through Mali. “In the desert we didn’t eat. For two weeks, there was no food,” he remembers. “I had some bread in my pockets, but it ran out after three days. We’d have half a glass of water once a day.”

They passed Timbuktu and kept moving towards Algeria. “It was so cold and windy in the desert at night, and we only had our clothes,” Moussa says. “I’d curl up with my hands over my head to keep warm.”

Finally they reached the Algerian coast. Moussa had survived the desert, but another life-threatening journey was ahead: the boat trip to Europe.

He paid $500 for a place on a small inflatable boat, crushed in with 50 other refugees. Out on the Mediterranean Sea, “the motor broke and we were stuck for five days,” Moussa says. “We were in the middle of nowhere and the boat was sinking. The water was up to our necks.

“I don’t know how to swim. We all thought we were dead.”

Malik also ran from his west African country, Liberia, after being tortured. Like Moussa, he walked through the desert—“because there was so little water, we drank petrol diluted with water”—and took a boat across the Mediterranean. When the boat ran out of fuel, he and the others were adrift on the sea. They were rescued by a helicopter.

Moussa’s sinking boat was also saved. Both men eventually ended up in Rome. But like thousands of refugees in Italy, they had no place to sleep, no food, and no job.

“I slept outside, two days in the train station,” says Malik. “Then I got directions to a Caritas centre. People gave me guidelines to look for housing, somewhere to lay my head. And they asked about my problems.” Caritas Roma gave Malik information on his rights as a political asylum seeker. He also went to a Caritas clinic and joined a Caritas programme for victims of torture.

Both men now live in a Caritas shelter for refugees. They’re learning the language and working on job skills. “Caritas is good to foreigners. You can eat, sleep, get medical care,” says Malik. “Without Caritas, living in Rome would be too hard.”

Caritas Roma runs the shelters and clinics—along with legal aid centres, language classes, soup kitchens, and nurseries—so that immigrants can get the help they need. In Italy, where racism and intolerance against immigrants are sometimes a problem, Caritas offers dignity and support to people who have gone through horrible suffering. 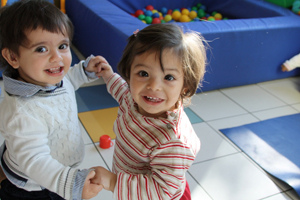 At a nursery run by Caritas Roma for the children of immigrants, toddlers play, dance, and sing.
Credit: Laura Sheahen/Caritas

At a Caritas soup kitchen not far from the Colosseum, over 400 people a day come for free hot meals. There are men from the Middle East, including Iraqis and young Afghan men who have made their way to Rome on foot and by bus. There are refugees from Somalia, Eritrea, and the Ivory Coast. And there are Italians as well; the economic crisis has not spared the country. Some of those who come for food are “divorced Italian men,” says a canteen volunteer. “The men are supporting a wife and child but don’t live with them”; they don’t have much.

Italians do at least have the documents they need to live and work in the country. Immigrants take what jobs they can find. “They sell newspapers at traffic lights, or work in restaurants, going from cleaners to a higher job,” says Carlo Virtu, who runs a Caritas shelter. Caritas helps immigrants with paperwork that may help regularize their status.

At a migrant centre near the banks of the Tiber River, a Caritas case worker talks about an African woman targeted in her home country for political reasons: Caritas helped her pay her rent in Rome while she got on her feet. “These are victims of violence and torture,” she says. “You can see the consequences of what happened to them in their countries. But their faces change when they realize there’s a way here in Italy.”

Across the city, thousands of frightened, exhausted newcomers are learning to navigate an unfamiliar culture thanks to Caritas Roma. Now 19 and preparing to leave the shelter, Moussa hopes his most difficult days are behind him. “My life started when I came to Rome. I sleep well, I eat well, I go to school,” he smiles. “I am happy here.”