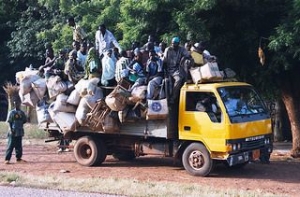 A truck picks up passengers along the road in Southwestern Niger. Credit: Commons

Which migration issues in Algeria did you discuss?

We talked about sub-Saharan migration. This is not about the routes taken by the harragas, the young Algerians who leave for Europe. It’s a highly sensitive issue, and the local authorities wouldn’t want us delving into their problems!

The main problems, in addition to poverty which doesn’t really change their situation on departure, are sub-Saharan people traffickers and undocumented migrants being turned back at the country’s southern border.

The traffickers are sub-Saharan Africans who take advantage of their compatriots’ dreams and the fact that it’s now almost impossible to get a work visa for Europe. Illegal routes are set up for those who can come up with astronomical sums of euros or dollars!

The turning back of migrants is one of the consequences of the externalisation of European borders.

Could you describe a migrant you have met? Someone with an unforgettable story to tell?

A young Congolese woman who lived with her mother in Togo. Still a minor at the beginning of her adventure, she did very well at school. In her last year of school, she could have expected to carry on in Togo with no problems.

At the same time, many residents were leaving a refugee camp for Ivorians having been lured by Congolese and Ivorian traffickers who had come from Algeria. The refugees were promised a stable situation with a house and a job or education “offered” by the UNHCR and other NGOs (bait!).

One of the traffickers came across this young woman and her mother and promised them the same things. As they didn’t have enough savings for both of them to go, the mother entrusted her daughter to these dream merchants.

She was 17 years old. Today, she’s 19. She’s pregnant, homeless and has never returned to her studies. She lives in derelict houses with other more or less willing victims of this trafficking. She was lucky not to have been subjected to sexual abuse. She had a love affair with someone. But today this boyfriend whom she’s seeing again is unwilling to take responsibility for his upcoming fatherhood.

What should governments know about migration from Arab countries to other Mediterranean countries?

Arab countries are the arena for sub-Saharan migration, for which the countries of the North are partly responsible. The resources of the South, over exploited by the North, contribute to the flight to the North, precisely where their plenty ends up! The migration of young people from the Maghreb is an even more complex issue, in which the quest for freedom and employment are connected. There’s also a quest for identity.

But they know all that and keep it hidden.

What are the main needs of migrants in Algeria?

Getting justice, the right to work and freedom of movement. Indeed, very few of them want to stay here, but they’ll tell you they need to earn money quickly so that they can get to Europe at any cost. So the NGOs are a godsend. They even give to people who are working. But the crossing from Morocco to Europe is very expensive. You need thousands of euros, and some people manage to rustle up this sum.

How does Caritas Algeria help them?

We’ve opted for indirect assistance aimed at promoting advocacy regarding free movement and respect of human rights along the migration routes. We don’t want our actions to be hijacked by migration gangs and the migrants themselves in order to serve illegal purposes.