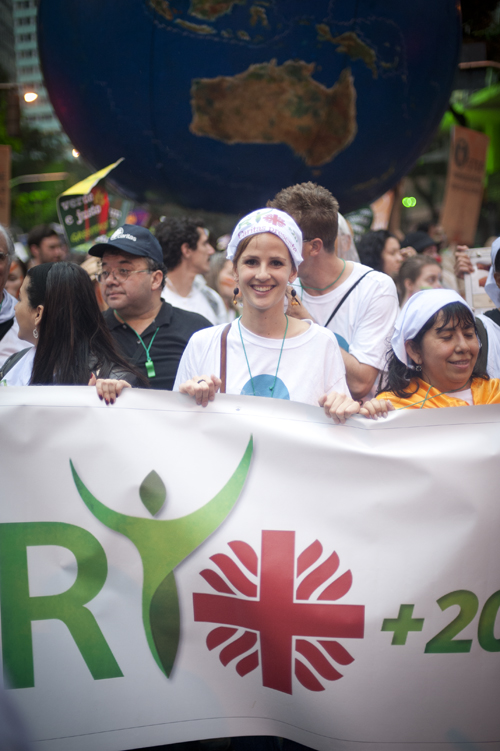 Solidarity can be the currency of an alternative economy agreed Caritas representatives at a panel event during Rio+20 Summit, the United Nations Conference on Sustainable Development taking place in the Brazilian capital.

Caritas Brazil, France, Peru and Costa Rica and other staff of the Catholic confederation of aid agencies reflected on how to democratize economics so that it works for all humanity and for a greener planet.

Humberto Ortiz from the Church in Peru presented an overview on the impact extractives industries such as logging and mining were having on the Amazon basin. He urged for an economic model for Latin America that promotes solidarity and a green economy through dialogue between the public, private and civil society sectors and that policies must work on all levels.

Ademar Bertucci of Caritas Brazil also participated at the event. He said the ‘solidarity economics’ concept must work for the majority of the labour force with a country and be created though appropriate national legislation. He stressed the importance of diversity within ‘solidarity economics’ and that the creation of sustainable development cannot be created through a one-size fits all model.

Jacqueline Hocquet, responsible for Latin America in Caritas France, shared the perspective of Europe and its contributions to job creation. Wendy Fields, a partner of Caritas Costa Rica, presented the case of Coopetarrazú, a group of farmers in San Jose in Costa Rica. The initiative began 50 years ago with a cooperative for coffee production supported by Caritas. It now has 3000 employees.

The next day, Caritas staff members joined representatives of its sister network CIDSE, the Holy See, Franciscans International and other faith based organisations at a side event on “Sustainable Agriculture and Society: food security, land and solidarity.”

Participating at the event were Cardinal Odilo Scherer, Archbishop of Sao Paulo and the representative of the Holy See at Rio+20, Archbishop Paul Yembuado Ouédraogo of Bobo-Dioulasso and representative of Caritas Internationalis, Gisele Henriques of CIDSE, Fr. Luis Scozzina, of the Franciscan Centre for Studies and Regional Development and Maria Cristina dos Anjos of Caritas Brazil.

Cardinal Odilo Scherer said, “We continue to see the consequences for human development when the human person is not placed at the centre of political, environmental or social development but is rather placed at its mercy. Read the rest of his remarks here.

On Tuesday, June 19, the Holy See and its co-sponsors Caritas Internationalis, Franciscans International and CIDSE outlined their position on how to achieve sustainable development at the Rio+20 Conference. The side event was entitled, Agriculture and Sustainable Societies: Food Security, Land and Solidarity.

Cardinal Scherer expressed deep concerns over the international community’s widely embraced position for achieving sustainable development. He said that authentic sustainable development is not achieved by economic and environment gains alone but rather its ability to protect the dignity of the human person.

He challenged today’s leaders by pointing out that authentic global solidarity must motivate political figures to promote human dignity and solidarity and a world where the wealthy consumes all resources is scandalous.

He said stewardship recognises the contribution of technological science in addressing food security but warned that advances must always be prudent to serve all of humanity. What is foremost are greater investments in the family to promote a long-term agriculture future.

CIDSE representative Gisele Henriques shifted the attention of the event to the issue of land grabbing. She called for immediate action by governments to end land grabbing because investing in large pieces of land contributes to poverty and violates the human rights of the poor. Mostly concentrated in Sub-Saharan Africa and Latin America she cited the scope of land grabbing in just the last 2 ½ years alone as the equivalent to 1/3 the size of Europe.

Next on the panel to present was Maria Cristina Dos Anjos, Secretary General of Caritas Brasil. She spoke about food and nutrition security in Brasil and highlighted the achievements of a program in which more than 18,000 people in 380 communities are served.

Fr. Luis Scozzina of the Franciscan Center for Studies concluded the side event by directing the attention on BioEnergy and Food Security in Argentina. The goal of their mission is to promote a new cultural paradigm for ecological conversion and integral human development, thereby answering the call of John Paul II.