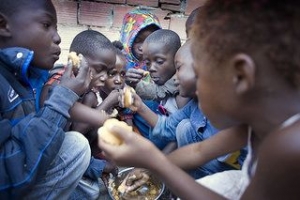 To mark World Refugee Day on 20 June, we spoke with Sr. Laurence of Caritas Algeria.

Refugees and migrants come to Algeria on their journey from poorer African countries to cross the Mediterranean into Europe, but they also now come there as a final destination itself. Algerians too head north in search of opportunities unavailable at home.

“Few of the migrants want to stay here,” said Sr Laurence, MSOLA. , who works on migration issues for Caritas Algeria. “They will tell you what they need is fast money to go to Europe at all costs.

“It’s almost impossible today to obtain a visa to work in Europe. Smugglers and traffickers from sub-Saharan Africa take advantage of the dreams of their countrymen. Clandestine routes are set up with huge sums of money changing hands. Thousands of Euros are needed and some migrants find them.”

Sr Laurence recalls the story of a young Congolese woman who lived with her mother in Togo. The teenager was doing well at school and was expected to continue her studies. But smugglers offered her employment opportunities and a stable situation abroad.

The mother and daughter had only enough money for one to go, so the young woman went. The promises turned to be empty. Two years after, at 19-year-old, she is now living on the streets. Her studies were never resumed. She fell in love with a man and became pregnant, but her boyfriend is not interested in accepting his future responsibilities as a father.

Caritas Algeria provides such refugees and migrants with healthcare, education and counselling through a ‘listening centre’, as well as cultural activities such as drawing, dance, cooking and exchanges with local residents. The needs can be acute, but according to Sr. Laurence, the greatest need is for “Justice. The right to work and move freely.”

Caritas organisations from the Mediterranean countries met to discuss migration at the Caritas Migramed Conference in May 2012 in Cagliari, Sardinia.  Sr Laurence was one of the participants. “European countries are partly to blame for the migration,” she said. “The South has seen its riches overexploited by the North. People from the South are just going to where their resources have ended up.”

Caritas organisations pointed some of the blame at the border control operations of the EU that force people to find different routes through smugglers and traffickers.  A final statement at Migramed conference said, “It is disgraceful that in our world of plenty we are still witnessing people risking and losing their life when crossing the Mediterranean to reach Europe.”

Bilateral agreements between the EU and North African states see countries like Algeria take back its own citizens who have attempted to migrate but also nationals from a third country. “Former countries of transit (notably the North African countries) become countries of destination of migrants and have to deal with huge pressures. At the same time, migrants’ rights are violated in these countries,” said the Migramed Conference statement.

Caritas stresses that international and European law recognises the right to leave any country, including one´s own, and to return to one´s country, the right to seek asylum and right to asylum as well as the principle of non-refoulement (sending migrants to countries where they may be persecuted).

*Missionary Sister of Our Lady of Africa