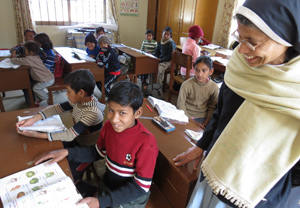 At a shelter for HIV-positive people in Nepal, women learn skills and children go to school.
Credits: Laura Sheahen/Caritas

“My husband was getting sick a lot. He had tests—we went to different hospitals.” In the early 2000s, Manjula*, a woman raised in India but living in Nepal, was concerned that both her husband and small daughter were so often ill. “Then we went to a shaman. He said my husband got sick because he married a non-Nepali girl.”

Neither shamans nor hospital doctors could pinpoint what was really wrong. Manjula’s daughter Sonam* “always got sick—fever, dizziness , fainting,” Manjula remembers. “They thought it was things like pneumonia. She’d take antibiotics.”

After years of false leads, the family finally learned the truth: all three of them had HIV. “My husband was becoming thin as a stick,” says Manjula. “He died.”

Manjula was left alone with Sonam and a second daughter, a baby who was HIV-negative. “It was difficult to get the treatment in the village,” she says. “I didn’t know anything about the treatment.”

Manjula found somewhere to turn: Karuna Bhawan, “House of Compassion,” a home for HIV-positive women and children in the hills outside of Nepal’s capital city, Kathmandu. Run by the Sisters of the Adoration of the Blessed Sacrament, the home is a loving space for people who are sometimes rejected by society.

Mary*, now 18, didn’t know her diagnosis for a long time. When she was small, “my parents would go to the hospital a lot,” she remembers. “Maybe they knew, but no one told me.”

Mary’s father died when she was 8; two years later, her mother died. “I found out I was infected then.” 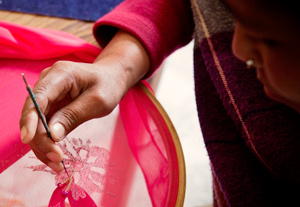 A staffer at Karuna Bhawan believes the mother may have refused treatment because of shame or stigma. Mary’s well-off relatives wouldn’t keep her for the same reason. “It would be stigma for their own children,” surmises Father Pius Perumana, director of Caritas Nepal and former head of Karuna Bhawan.

Whatever her family’s stance, Mary has the smile of a young person who has been loved and cared for. Children and young teens at the home have their own classroom and study during the day. The women earn money from tasks like sari embroidery. They raise rabbits and goats and have a garden. They receive antiretroviral medicine provided by the Nepalese government with help from the Global Fund. “I take care of the children and help give them their medicine,” says Manjula.

Because in South Asia many families give preference to boys, “The sisters try to take more girls than boys,” says Father Pius.

Now 35, Manjula is healthy enough to think about her own future and her daughters’. “If Karuna Bhawan and the sisters weren’t here, I probably would have died,” she says. “I’d like my daughters to do work like this, helping others.”

*Names of patients have been changed