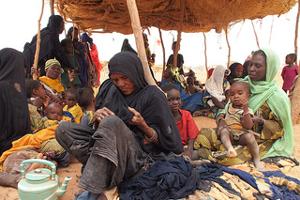 According to the authorities in Niger, more than 30,000 Malians from the Ménaka area and an estimated 8,000 Niger nationals living in Mali have found refuge in Niger since the beginning of the year, fleeing the fighting between government forces and armed groups. In a refugee camp in Mangaize, Caritas Niger (CADEV) provides food and other aid to the refugees. They are more than 3,000 in the camp Mangaize.
Credits: Worms/Caritas

“We left our village because we were starving,” said one elderly refugee from Mali. She has come to a relief camp in Mangaizé in northern Niger where Caritas Niger (CADEV) works.

“I left my village when the rebels attacked,” said another woman. “I escaped at the last moment because I could not find all of my children. I’m here with the two youngest ones, but I don’t know what’s happened to the eldest two.”

They’re both new arrivals, coming to join 3000 other refugees from Mali in Mangaizé camp. Some have been here for four months. They’re fleeing conflict in northern Mali between different rebel groups and government forces.

They are also fleeing hunger. Mali is experiencing the same food crisis as much of the Sahel in Western Africa, but the violence means aid agencies can’t get through to people in need, especially in the vast rebel held areas.

“The first refugees who arrived in Mangaizé could count on the hospitality of the local famers in Niger,” said Boureima Mamoudou, relief camp manager for Caritas, “Even if the Nigeriens themselves had little food, what they had they shared with the refugees from Mali.”

Since the start of the crisis, Caritas has been registering new arrivals, giving them tarpaulin for shelter, basic items like cooking pots, clothing and of course food.

“Initially we thought that the crisis in Mali would be over in a few months and that the refugees would be here for a short time,” said Caritas Niger Secretary General Raymond Yoro.

“We have been surprised at the length and extent of the crisis. The refugees from Mali are coming to areas in Niger where food scarcity is at its highest. In Mangaizé, food production is down by 90 percent,” he said.

Locals have finished their own food supplies. They need Caritas aid themselves to survive the crisis and plant for next season.

“The refugees from Mali are mostly agro-pastoralists (animal herders). Some have come with their animals,” said Raymond Yoro. “But the pastures are limited in Niger. Competition for grassland between the Malians and the local Nigeriens could spark conflict.

“We want to go home, but we have no choice than to be here,” said Hamidou Maiga, a young nurse from Mali. She has seen what the rebels are capable of doing. “They took everything in our village, they terrorised the people and even sexually assaulted the women,” she said.

The nurse has been able to help in the camp and the village by providing some health care. “I try to give back to the camp population and the local population by putting my nursing knowledge to serve all patients,” she said.

There are over 150,000 Malians forced from their homes but still inside the country, of which two-thirds are in the north of the country. They have little or no access to international aid. 200,000 Malians have fled to nearby countries, including 40,000 in Niger.

Caritas is helping these people where it can, in Mali, Burkina Faso Mauritania and Niger. But a stable peace is need so they can return home.

“We must stay united,” said Boureima Mamoudou, relief camp chef. “What the Malians live through today, perhaps we Nigeriens will live through tomorrow.”