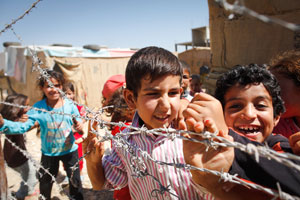 Since 2011, violence in Syria has forced thousands of people from their homes. In mid-July 2012, the conflict worsened rapidly and a huge wave of refugees poured into Lebanon, Jordan, and Turkey.

On July 24, Father Simon Faddoul, the head of Caritas Lebanon, spoke with Caritas Internationalis about the plight of the new refugees in his country.

The situation has deteriorated rapidly in the past week. Can you tell us what’s happening now?

The past five days have been extremely dangerous to the people of Syria. People are fleeing the war and coming to Lebanon, Jordan and Turkey. Here in Lebanon, it’s been like a human flood over the border from Damascus. In 24 hours we had, at one time last week, over 15,000 people enter at one legal border crossing. If you count all the rest who come in other ways, it’s far more. They’re arriving in cars, trucks, buses, and on foot. Those who are crossing illegally are usually on foot. They’re coming into the Bekaa Valley, an area of Lebanon close to Syria. The crisis is getting much bigger than anyone imagined. It’s all happening so quickly.

Lebanese families are trying to host the refugees, but were poor to begin with. What are you seeing in that regard?

I visited a few host families. We distributed mattresses and blankets to them. You’d see a two-room flat where a family of eight used to be living. Now they have squeezed themselves into one room so the refugee family or families can go in the other room. In other places, some people put up their own tents. There’s no sanitation or anything like that.

What are the medical issues?

There are people who are wounded and people with chronic diseases. Our mobile clinic tours where Syrian refugees are—there are a doctor and nurse on board and all sorts of medicines. We provide preventative care and basic medicine. If there’s need for more serious intervention, we refer them to our health centers or to hospitals. Another issue we are encountering is that some of the refugees are fasting for Ramadan, which just started. They don’t eat or drink during daylight hours. The days are very long–5 am to 7:30 pm. It’s very hot in the Bekaa valley, it can reach 45 degrees. With the heat and not drinking water, there are risks of dehydration. We respect their commitment but it’s very difficult for them.

How are Syrian refugee children doing?

Children are coping badly. We’re trying to develop a programme for the children. School is around the corner, and the Lebanese government will probably allow Syrian refugee kids to go to government schools. But the Syrian school system is different from the Lebanese one—a different curriculum, and they only teach in Arabic. It’s quite complicated.

Caritas Lebanon has been providing food and emergency items to Syrian refugees for a while now. With this new influx, what are your plans?

Caritas Lebanon has been working with Syrian refugees for 14 months. We’ve been in the north, middle, and east of the Bekaa Valley, helping thousands of Syrian families and hundreds of Lebanese host families who lived in poor conditions even before this crisis. Now we’re taking a new initiative and getting much more heavily involved because things are getting really out of hand. You have people all over the place.

What do you think the future holds?

I believe we will be facing quite a catastrophe if things continue to worsen in Damascus. People in Damascus have nowhere else to go but Lebanon. We don’t see the crisis becoming less. We see it getting worse. There are so many people suffering. The human suffering is great. We’re trying to provide what they need to stay alive—food, bedding, medical care. But we also have to be with them, to listen to them, to sympathize with them. And pray for peace.