Banning women from work is not the answer, says Caritas 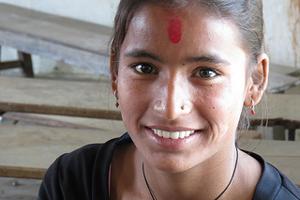 Like many teenage girls in impoverished Nepal, Sushila is vulnerable to employment scams. Caritas pays school fees for Sushila and others, making sure teenage girls stay in school.
Credits: Sheahen/Caritas

Nepal’s August 2012 ban preventing women under 30 from working in Gulf countries is well-meaning but misguided, according to Caritas migration experts. The ban is intended to protect young women from suffering abuse while they work as maids in private homes. For years, Caritas has worked with survivors of such abuse.

“We appreciate the government of Nepal’s concern for migrant domestic workers,” says Rupa Rai of Caritas Nepal. “But the problems women face in Gulf countries will not decrease because of this age bar.”

Each year, hundreds of thousands of women leave Asian countries like Nepal, Indonesia, Sri Lanka and the Philippines to work in Gulf countries such as Kuwait and Saudi Arabia. Some are treated well, but others work long hours without being paid, often suffering beatings and sexual abuse.

Instead of banning migration outright, countries should develop “better strategies to provide both safety and decent work for women,” says Rai. “They should build the capacity of women to ensure they can work without fear of abuse.”

“This ban might even make women more vulnerable,” says Martina Liebsch, Advocacy Director for Caritas Internationalis. “When there are few or no job opportunities in the countries of origin, young women will resort to traffickers and smugglers to get out of the country.” Even if they do not use smugglers, many women faced with such bans often simply travel to another country where there is no ban, and then proceed to the country where they want to work.

“An alternative would be to conclude agreements with Gulf countries to give women legal migration options that include protection measures like monitoring,” says Liebsch. “The country of origin should watch over the quality and the fees of recruitment agencies, which often do not deliver what they promise and charge very high fees. Women are often indebted even before they leave the country.”

Migrant domestic workers sometimes run away from abusive employers. Caritas urges governments not to automatically consider such women as illegal immigrants. Instead, they should be given a temporary, free permit to stay during investigations of abuse, and a safe house where they can live. “In Middle Eastern countries, a system called ‘kafala’—in which a woman’s immigration status is contingent on her remaining with one employer—makes it very difficult for migrants to escape from nightmarish situations,” says Maria Suelzu, International Advocacy Officer at Caritas Internationalis. “Changing this system is one thing that countries of origin like Nepal should negotiate with Gulf countries.”

At minimum, says Caritas, women should receive pre-departure counseling and contacts they can call in the new country in case they need help. In Sri Lanka and other countries, Caritas provides such counseling so that women know their rights and can make an informed choice about taking a job overseas. But pre-departure guidance is not widely available in all countries of concern.

Moving forward, the best scenario would be for women to have better job opportunities in their home countries. “Women don’t want to leave their children behind, but feel compelled to do domestic work abroad because they have no other way to make money,” says Liebsch. “If governments can focus on education, training, and job placements for women within their own countries, fewer women will suffer.”