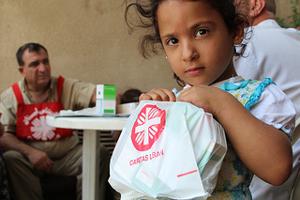 In eastern Lebanon, a Syrian refugee child holds free medicine given to her as part of a Caritas “mobile clinic” visit. Many refugee families are living in unsanitary conditions; children come to the doctor (left) because of diarrhea, coughing, lice, and other problems.
Credits: Laura Sheahen/Caritas

Why are so many people fleeing Syria?

A conflict between government and anti-government forces in Syria has escalated sharply since early 2011. Aerial bombardments, shooting on the streets, sniper attacks, and other types of violence have hurt thousands of Syrian civilians. Many Syrians were hiding in their homes for months, unable to work or go to school, before they decided to flee to other countries to escape the violence.

Most Syrians remain in their country. Some have been displaced and face the same challenges that Syrian refugees abroad face. Caritas is providing food in Aleppo and Homs, mainly for displaced people.

Where are the Syrian refugees going?

The refugees are primarily fleeing to the neighbouring countries of Jordan, Lebanon and Turkey. Some Iraqi refugees who were living in Syria have now fled back to Iraq.

Where do the refugees live?

Some refugee families are living in apartments or old buildings, often crowding into very small spaces. Some are being hosted by local families who are already poor.

Better-off refugees have been able to rent apartments in cities.

How are their living conditions?

Some Syrian refugees living in camp situations do not have adequate water and sanitation. Some camps have been set up in desert areas where the heat and animals like scorpions are problems.

In many cases, Syrian refugees who are living in apartments do not have money to buy food, and lack basic house items like buckets for water or mattresses to sleep on.

Most refugees and their children have nothing to do.

What is Caritas doing to help?

Caritas is providing free health care and medicine to refugees, including children. In Lebanon, a Caritas mobile clinic drives to places where Syrian refugees need care. In Jordan, Caritas has doctors on staff and its own clinics, as well as a relationship with a hospital where refugees can receive discounted health care such as operations.

How can I help?

Pray for the people of Syria and learn more about the crisis.