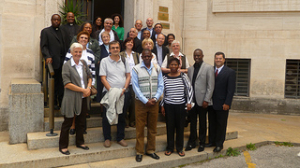 A diagnosis of cancer is devastating for anyone, but in many high-income countries, people receiving such news can be  reassured that they will receive treatment and hopefully be cured.

But what of the millions of people who live in poor countries where access to specialists and medicines are limited and where health infrastructure is weak?

Representatives of Caritas Internationalis and other Catholic Church-inspired organisations met with Dr. Shanthi Mendis of the World Health Organization in Rome recently to discuss this global issue. The meeting focused on the dramatic impact of non-communicable chronic diseases (NCDs) such as cancer, diabetes, cardiovascular and respiratory diseases on the lives and prospects of people all over the world, but with special attention to those in developing countries.

Of the 57 million deaths that occurred globally in 2008 (the most recent figure available), 63 percent were due to non-communicable diseases. Eighty percent of these deaths occurred in low- to middle-income countries.

Four major risk factors increase the likelihood of developing NCDs: tobacco use, alcohol abuse, unhealthy diet/lack of exercise and poverty. Poverty is the only risk factor over which most people have no control and has perhaps the most powerful influence over whether sick people will live or die.

People on low-incomes develop NCDs at an earlier age and the impact on their lives is more dramatic. They often have less access to good healthcare and are hit hardest by loss of earnings through illness. They may not be able to afford care costs. They’re also less likely to have access to nutritious food to rebuild their health.

“Caritas and other Catholic organisations already respond to health crises worldwide, including communicable diseases such as HIV and TB. They sponsor and  support hospitals and rural clinics, employ health workers and have programmes to boost nutrition and health among the poorest members of society. NCDs present a prime health challenge of the 21st century, so our Church organisations are hearing the call to scale up our services in this field” says Msgr Robert J. Vitillo, Caritas Internationalis’ special advisor on HIV/AIDS.

Some examples of NCD-related programmes already being operated by organisations present at the meeting are:

But the challenges are massive. Many NCDs begin to take hold early in life, and once symptoms emerge treatment is much more expensive, complex and often unsuccessful.

Deepthi George from Caritas India said, “India is still struggling with communicable diseases such as HIV, TB and leprosy while NCDs are becoming more and more common because of changes to lifestyle.”

Also, those living with  a communicable disease, such as HIV or TB, are much more likely to develop NCDs, such as heart disease, high blood pressure, asthma, or diabetes.

Participants in the meeting agreed that “an ounce of prevention is better than “a pound of cure”. The most cost-effective approach is to lay the groundwork for good health in childhood. Besides prevention, early detection is essential. Also, advocacy to change government health policies is vital to halt the growing “epidemic” of NCDs such as obesity in both rich and poor countries.

The Rome meeting represented an important step forward in the response of Catholic Church-inspired organisations, including Caritas, to the life-threatening challenge of NCDs in our modern world. Participants returned home with a clearer idea of the challenges in specific countries, but also with a new perspective on how their organisations can become part of a united force to ensure that everyone has a chance of a long and healthy life, regardless of who they are.