The women’s committee of Hadj al-Dérib in Chad 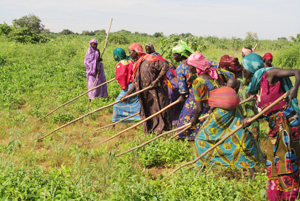 Women of Hadj al-Dérib lined up side by side and hit the sandy soil in the same rhythm with their little shovels.
Credits: Lisa Krebs/Caritas Switzerland

It’s 7 am in Hadj al-Dérib, a village in the Sahel region of Chad. At the edge of the village, 26 women are cultivating a peanut field together. Every woman wears her own small, lightweight shovel on her shoulder. A horse is pulling a two-wheeled cart, loaded with a canister of water, equipment to prepare tea and agricultural tools. The women are in a good mood, they chat and laugh on their way to the field. After three difficult years, they hope to finally have a good harvest. Today, the field will be weeded.

On the way to the field, Hadjara Dongong speaks of the difficulties of the past years: “Three years ago, in 2009, the harvest was destroyed by a flock of birds. After this terrible event, in 2010 floods devastated the fields. Last year, the locusts infested the crop and as if this would not be enough, it did almost not rain during 2011. For months, the inhabitants of Hadj al-Dérib had to feed themselves with wild plants. Even the seeds for the next planting season were eaten in times of need.”

But Hadjara does not like looking back to the past. She is happy that this year’s harvest looks promising. “This year we will –God willing – have a good crop. We not only cultivate groundnut but also corn, millet, niébé and sesame,” she said. The much-needed seed for cultivation is obtained from the African organisation Acord, a partner organisation of Caritas Switzerland and thanks to the financial support of the international Caritas network.

It is only natural that the women work together in the field in Hadj al-Dérib. All 120 women of the village are members of a committee, which takes care of the cultivation of various crops as well as the granary and the mill. Each committee has a president, a vice-president and a secretary.

In June, the committee for the peanut cultivation prepared a large field. Afterwards, the women waited for an abundant rain in order to sow the seeds. Now they are hoping that they will collect the harvest by mid of October.

“A part of the harvest will be conserved as seeds and will be stored in a collective granary. The bigger part of the harvest will be sold at the market,” said Hadjara. With the revenue from the sale of the harvest, the women’s committee will buy the grain, which then will be evenly split between the households of the village. This grain is an important addition to what each family produces on their fields. The seed of the collective granary guarantees the sowing in the coming year – a security for farmers and their families.

Meanwhile, the women have reached the field. The horse-drawn cart is unloaded and the women start their work. They are lined up side by side and hit the sandy soil in the same rhythm with their little shovels. The rhythm soon accelerates. One of the older women emits a high trill and the women begin to sing a song. With the prospective of a good harvest and a steady income, even the hard fieldwork under the torrid sun of the Sahel can spread happiness.