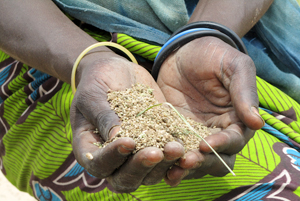 Khreb – wild grain, food during the crisis in Khregané, Chad. Chad was one of the worst affected countries, with poor rainfall last year hurting farmers and animal herders the most. Then locusts and severe flooding added to the misery.
Credits: Lisa Krebs/Caritas Switzerland

Moussa Ismael Muhammed is making his way through the lush green of his field. In July, the much-needed rain finally arrived. Since then, his farm has prospered. The farmer proudly shows the bright, light green sorghum for the harvest in October. “Sorghum is our basic food,” said Moussa. “But we also cultivate millet and peanuts in our fields.”

Moussa lives with his wife and four children aged three, four, five and seven in Kreghané, a village that belongs to Guéra region in eastern Chad. Like most farmers in his region, he owns about one hectare of land, which he cultivates during the three months of rainy season. The products grown in this soil have to be sufficient enough to satisfy the annual needs for all six members of his family.

Although Moussa is happy about the condition of the fields, his mood changes noticeably when he sees women swinging large baskets through the air. “We still have not overcome the crisis”, said the farmer thoughtfully.

“By swinging their baskets, women are chasing away the birds, which are pecking at the wild grain. In times of need, like this year, these grains are also an important food source for us humans”, said Moussa, showing a bowl of tiny grains.

In August 2011, when it stopped raining during the days of cultivation of the land, not all grain was sown. The amount of grain that grew during the following weeks was a lot less than during a normal year. Cornfields have also been plagued by the locusts just before harvest time.

Due to the lack of food, men were forced to earn money outside of the village as day labourers in order to earn wages to purchase food. Therefore, many men had to travel to Mangalmé, the capital of the department. Women and children were left behind and often struggled to provide for their own livelihoods.

In June, the tide turned. The local Caritas organisation Aura, a partner organisation of Caritas Switzerland, became aware of the farmers difficult situation in Kreghané. Local staff visited the village and were informed about the situation of the individual families. Thanks to the financial support of the international Caritas network, Aura then distributed grain and seeds to the needy families.

“It was very important for us that we didn’t only receive grain”, refers Moussa. “Grain indeed secures the survival and gives us strength to cultivate our fields, but without seeds we had nothing that we could plant!” Moussa explains how needy people of the village had consumed the already meagre harvest, with no seeds left for the next year – an act, which is understandable when considering their hunger.

Now, Moussa starts with his work again. He transplants the small millet plants from the seedbed into a larger field. He hopes that the villagers will no longer have to battle with birds for the wild grain. The sight of the shoots emerging from the soil raises hope for the future of his family and community.