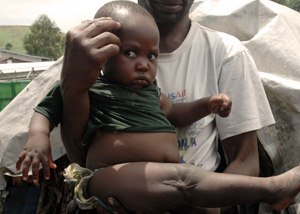 A baby at Camp Mugunga with bullet scar, who was injured in an incident earlier in the year, receives help from Caritas
Credits: Taylor Kakala/Caritas Congo

African Catholic Church leaders meeting in Kinshasa say that escalating violence in the east of the Democratic Republic of Congo is causing a major humanitarian tragedy.

Presidents of Bishops’ Conferences and Bishop-Presidents of national Caritas organisations from 34 countries in Africa signed a statement condemning the conflict, which has seen the city of Goma fall to ‘M23’ rebels on 20 November.

The African bishops say, “We are outraged and shocked by the escalating armed violence in eastern Democratic Republic of Congo which is causing again a major human tragedy.

“Thousands of men, women and children, the victims of this war which is imposed on them, are displaced and abandoned in destitution in Goma and its surroundings. They are exposed to the bad weather, hunger, rape and all kinds of abuses, including recruiting of children into the army. This constitutes an offence to their dignity as human beings and children of God.”

Caritas staff representatives in Goma estimate that the latest fighting has forced 100,000 people to flee, many from relief camps and host communities where they had sought safety.

Fr. Oswald Musoni, director of Caritas Goma said, “Caritas offices are open again and our staff are working full strength right now in the communities affected by the conflict, seeing what the needs are. The situation is calmer, but we’re still uncertain about what tomorrow will bring.”

The African bishops said, “The time is no longer for war or conquest, but rather to promote cooperation between peoples and that the territorial integrity of the Democratic Republic of Congo must be protected and respected by all.

The bishops called on the international community to end the suffering and despair of the civilian population in eastern Congo. They said the UN, the African Union, the EU, Congo’s government, regional governments involved and multinational extractive companies must address causes of the conflict through dialogue to end the cycle of violence. The African church leaders said, “The perpetrators of such violence and destruction should be brought to justice.”

The bishops are at meeting 20-22 November on the work of Caritas on the continent. Read their full statement