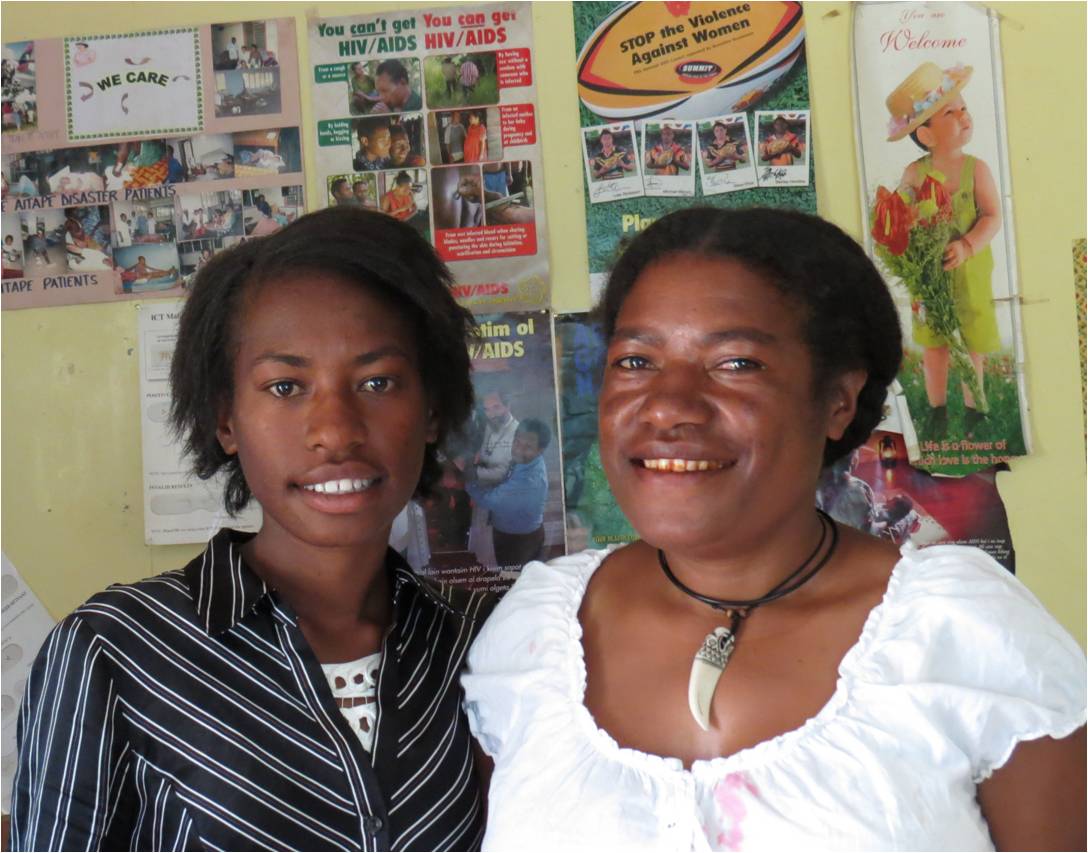 Women are particularly vulnerable to HIV in Papua New Guinea. Jean and Janet raise awareness on the issues through their volunter work at a Church centre in Mendi. Credit: Patrick Nicholson/Caritas

Epeanda means ‘return to life’ in the local language of this part of Papua New Guinea’s Southern Highlands. It seemed a good word to the staff, volunteers and patients of the Mendi Diocesan HIV and AIDS programme to describe their activities.They liked it so much, they ended up using it as a title for a new centre that opened there in 2005.

The Catholic Church’s work on HIV and AIDS in Mendi stretches back to 1995. Then the work revolved around explaining the virus, how it is transmitted and challenging the stigma attached to those people living with HIV.

Sr Gaudentia Meier, a Sister of Divine Providence from Switzerland who works at the centre, said better testing and treatment has changed everything. “Before treatment became available and testing more widespread, we were only able to help people who were infected become accepted within their community,” she said. “All we could do was help them die in peace. We could keep them alive a little longer perhaps, find somebody to care for their children, but there was little else we could do.”

By 2004, new infections were increasing at a rate of 50 percent annually in Papua New Guinea. The virus was spreading at the same rate as in Africa in 1992. Many experts were predicting that the country would experience a major pandemic. But that scenario never played out.

“We learned from Africa,” said Sr. Meier. “We started to test early. We got patients quickly onto antiretroviral therapy. Once they are on ART, they are much less likely to pass on the virus.”

A rapid expansion of HIV testing centres – from 15 to nearly 180 in the past five years – has seen over a quarter of a million men and women volunteer for tests. The Catholic Church in PNG has been recognised both within the country and by donors as leading the transformation. In Mendi for example, they provide treatment and testing to two thirds of the region. 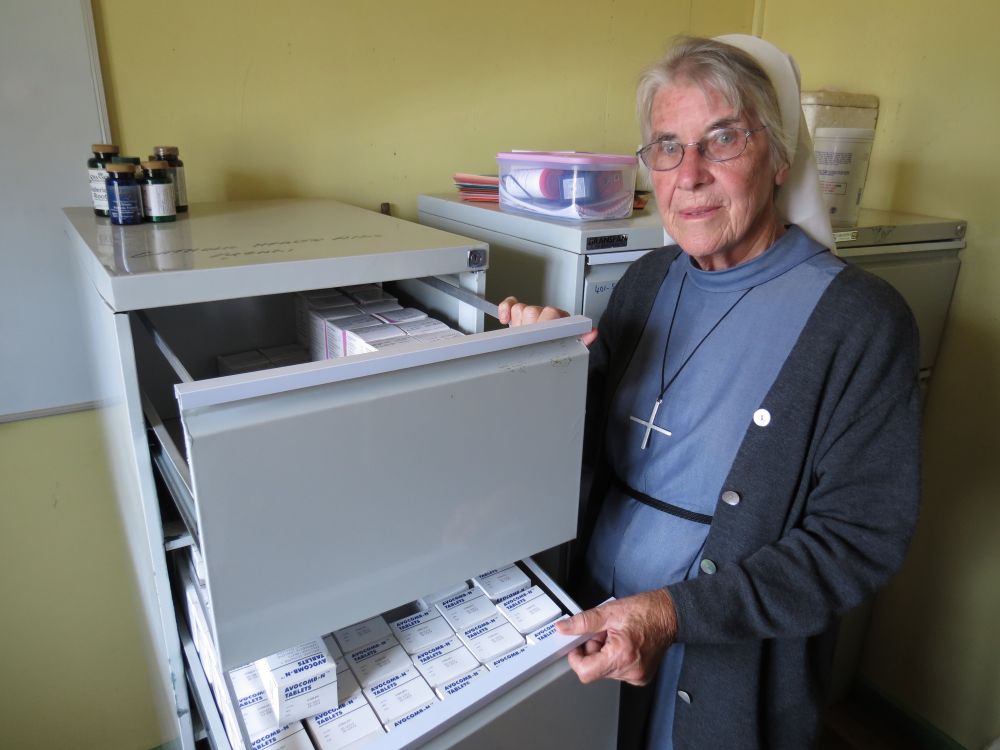 Today the Epeanda Care and Counselling Centre continues to raise awareness among the local community through Caritas volunteers and a focal person in each parish. World AIDS Day is particularly important for holding events, discussing the importance of testing and tackling stigma.

“Having HIV has become manageable,” said Janet Nichols, an HIV-positive volunteer  at  the Epeanda Centre. “We are treated the same. Now we can go to same river and wash. Before they told us to go elsewhere.”

The centre also carries out voluntary testing, provides counselling and antiretroviral therapy, and has a special programme testing pregnant women and helping those who test positive to ensure their babies remain negative.

One example of life carrying on as normal is Paul Jack, another volunteer at the centre. He has been on antiretroviral treatment since 2008. Despite being HIV positive, he and his wife have been able to have two children. Both are HIV free.

The ART for the mother prevents the virus being passed to the baby while still in the womb, during birth, or during breastfeeding. In the case of discordant couples, the infected partner is 96 percent less likely to infect the uninfected partner during sexual intercourse if she/he is on ART

“We have thirteen couples were one is negative and one is positive,” said Sr. Meier. “Through ART, the HIV-negative partner has stayed virus free, even in couples who have gone on to have babies. All the babies have stayed HIV free too.”

Though there has been great successes, HIV and AIDS in Papua New Guinea remain a major challenge. Almost all new infections in the Pacific region occur on PNG.There will be 500,000 people living with HIV in PNG by 2025 if rates stay the same.

Sr. Meier said getting men like Paul Jack to go out in the community as well as women to raise awareness is a key new initiative. She said polygamy, being unfaithful and sexual violence are driving new infections and tackling them needs the involvement of men.

“Rape is like a deadly disease on PNG,” said one woman at the centre. The PNG Law Reform Commission reported that 70 percent of women had been physically abused by their husbands, and in some parts of the country the number reaches 100 percent. Human Rights Watch estimated that 50 percent of women in PNG have experienced forced sex in their lifetime.

Jean Mary, 21 years old, is another volunteer at Epeanda.  Bright, attractive and engaging, she chooses to share her story.  She became infected after being gang raped by strangers. Tragically, she knew at the time of her rape that she could safeguard against getting infected if she reached a clinic in time. “I lived far away and I couldn’t afford the bus fare, and nobody in my family would help,” she said.

Part of the problem is impunity for the perpetrators.  When she went to the police, they blamed her for wearing trousers, which they said is a ‘provocative’ thing to do. When one of her attackers tried to rape her again months later, she managed to escape, badly bruised and bloodied. Again she went to the police and again they accused her of trying to seduce the attacker. “I felt helpless and hopeless,” she said. During one recent month in Mendi, 17 women were raped and the police failed to act on one single case.

Now Jean goes to villages to speak about HIV and AIDS and share her story. “I want to help other women come forward,” she said. “I think by us speaking out, it will encourage others to do the same.”

She is still living with the trauma of the incident, but looks for comfort to the other volunteers who meet at the Epeanda Centre each Sunday after Mass. “We’re friends for life,” said one of them. Thanks to advances in HIV treatment and care, they have every chance of making those lives very long, rich ones.