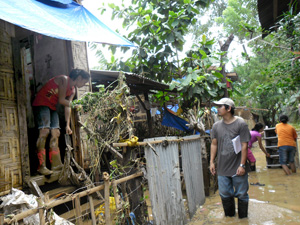 Fr. Edwin Gariguez, Director of Caritas Philippines, is with one of the teams in Suriago del Sur where he says damage has been substantial. “Most of the coastal area has been affected,” he said. “In the town of Nigig, only three out of 50 family homes are still standing.”

Caritas says the areas of Compostela and Davao Oriental have the highest needs, such as sleeping mats, blankets, water/hygiene supplies, and tarpaulins for emergency shelter.

“Caritas here have been able to channel assistance through the churches. Many people took refuge in churches, schools and gymnasium after receiving warning,” said Fr Gariguez.

“We have started to provide some people with rice and basic non food items but we will need more time and effort to be able to help many affected people.”

The teams report that there will be longer-term shelter needs especially in Compostela Province and Davao Oriental.

“Surprisingly the situation is not as bad as expected, but the material damage and agricultural impact of the typhoon will be felt many years to come,” said Fr Gariguez.

“Most of the shelter withstood the typhoon some have had roof damages but it provided the adequate shelter for many people,” he said.

Shelters built by Caritas and local partner in Iligan have for example withstood the typhoon.

“The low death tolls is the result of lessons learned from previous natural disaster ,” said Fr Gariguez. “Pre-emptive evacuation and early warning system worked. The authorities informed the local mayors and informed all communities. In some cases villagers did not want to leave their houses and the police forced them into shelter. So the implementation of preparatory phases have been successful.”

People are returning to their homes and electricity is expected to return by the end of the week.

6/12/2012 Asia, Conflicts and Disasters, Emergencies in the Philippines, Philippines by Caritas Internationalis