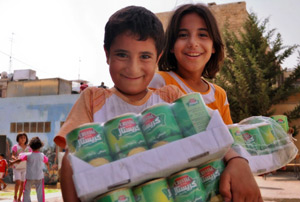 Caritas works with the Jesuits in Syria. Children collect supplies for their families at one of the school-shelters in Aleppo.
Credits: Avo Kaprealian and Sedki Al Imam/Jesuit Refugee Service

Under a blanket given by Caritas, a mother and child try to keep out the freezing cold temperatures and snow as they sleep out in the open in one of the parks of the Syrian capital Damascus. They are just two of 1.5 million people forced from their homes during the country’s civil war.

Tens of thousands of people have been killed and injured in the fighting in Syria. Each day, many people live in fear of dying in a car bomb, having members of their families raped, or quite simply not being able to find enough food.

With support from many other Caritas organisations, Caritas Syria has been providing food, medical assistance, helping children keep up with school and ensuring people are prepared for the winter. It has been working in Damascus, Aleppo, Homs, Hassakeh, Horan and on the coast.

In the midst of a harsh winter, Syrians face freezing conditions, a lack of diesel for heating and inadequate clothing. Caritas Syria President Bishop Antoine Audo of Aleppo told Vatican Radio. “It is very cold in Aleppo. We don’t have any fuel…it’s very expensive. Especially for the hospitals, the schools, of course in the houses. It’s really a real problem, this problem of fuel.”

Caritas Syria has focused on helping over 11,200 people pay their rent and on giving them warm clothes, heaters, blankets and stoves in an US$822,000 (€637,000) programme in an international appeal launched at the end of 2012.

The conflict has caused food shortages and what food is available comes at a high price. The price of bread has tripled over two months. The economy has also collapsed under pressure from the war and an embargo. What savings people had, have long since gone as the crisis enters its second year.

“All the people have become poor generally in Syria… before, all the people were living without hunger. But now even the middle class is living like the poor in Aleppo,” said Bishop Audo.

The numbers of people in need are overwhelming for Caritas staff. In Homs, the original aim was to help 200 families but the Caritas team working in the city identified 2000 families who needed help. The 60 young volunteers do their best to meet the daily needs by providing food baskets to those they can, reaching about 750 families. In Aleppo meanwhile, a temporary voucher programme for food begun last summer for 1000 people, continues today as needs are still great.

Caritas is also working in Jordan, Lebanon and Turkey where over 550,000 people have fled.

Syria’s civil war shows few signs of coming to an end. In his annual address to diplomats, Pope Benedict XVI said the violence needed to end before the country became “torn apart by endless slaughter and the scene of dreadful suffering among its civilian population”.

“I renew my appeal for a ceasefire,” the Pope said, “and for the inauguration as quickly as possible of a constructive dialogue aimed at putting an end to a conflict which will know no victors but only vanquished if it continues, leaving behind it nothing but a field of ruins”.