A Decade in Darfur: Healing Relationships 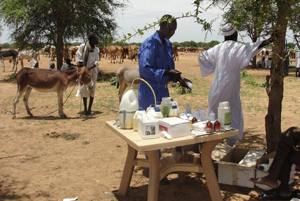 “When I entered my farm, it was so pretty that I was singing.” Abubakar, a 37-year-old father of ten, was happy with the rainy season in Darfur in mid-2012. “I saw I’d have a good harvest.”

Abubakar had put a lot of work into his crops of groundnuts, millet, maize and okra. “At the beginning of the season, I peeled the groundnuts to plant. It’s hard to shell so many. My fingers hurt and were swollen,” he remembers. “I worked on the farm for hours each day. I sweat so much my clothes were soaked.”

Not far away, thousands of livestock herders in Sudan were also working hard to keep their animals healthy and find food for them. “During the rainy season, nomads move from south to north,” says Mohammed Abdelkarem, a programme officer with Norwegian Church Aid (NCA), an implementing partner of Caritas. “On the journey, they pass through farming villages. There’s no fencing for farms. And sometimes farmers grow crops in areas that are meant to be animal paths.”

For decades, farmers and herders in Darfur lived in relative peace, often managing to resolve problems. If an animal ate crops, its owner might pay compensation. Herders might leave an injured animal with farmers, knowing it would be taken care of until that passed that way again. “In the old days, no animals hurt our crops,” Abubakar remembers.

But the violence that struck Darfur in the early 2000s changed—and continues to change–that dynamic. One day during harvest time in autumn 2012, herders arrived at Abubakar’s fields.“I saw huge numbers of camels and sheep eating my crops,” he says.“I was very angry, and so were my children.”

Abubakar managed to harvest about two-thirds of his crops, but the other third was lost. “If that crop hadn’t been eaten, I’d have six more huge sacks of millet,” he says. “This is our main food. One sack could have fed my whole family for almost a month.”

His fury about the loss colored his life. “I’ve had two bad dreams about it,” he says. His 7-year-old son wanted revenge.

Nomads are angry too. “The herders say, ‘you’re spoiling the land—this is our grazing land,’” according to Abdelkarem.

In Darfur, NCA and other groups funded by ACT/Caritas are working to repair relationships and prevent future problems. Often, they bring together wise elders from different tribes or ethnic groups to find a way forward.To make sure herders have a proper path for their livestock, an animal route committee agrees on and marks trails—“45 to 90 metres wide,” says Abdelkarem–by painting trees or creating other landmarks. To help keep herds healthy, NCA provides free vaccinations and veterinary care. The programmes also create wells and water points that herders can bring their thirsty animals to.

ACT/Caritas-funded radio programmes reach people over the airwaves. “A community member goes on air, a wise person,” explains Abdelkarem. “He receives calls and gives advice, such as ‘right now there’s a problem in M___ area between this tribe and that tribe. Here’s how we resolved it.’”

Once NCA forms a committee, “we go to the committee and talk about the importance of respecting each other and not resorting to violence,” says Abdelkarem. The committees strive to resolve disputes. “If there’s a problem, they talk to the offender and make a ruling, often a fine.”

In many cases, wise people from different groups “come together and make an agreement, saying they won’t resort to violence, they’ll pay compensation to victims’ families,” says Abdelkarem. The groups might agree to ban the use of guns in their areas, to come unarmed to market, and to resume movement between two villages that had been in tension. “The goal is that they develop a sense of togetherness, that they are brothers and sisters,” says Abdelkarem. “Every year, we talk to them, reminding them of the agreement and encouraging them to keep it alive. We involve mass media and radio.”

The programmes schedule exchange visits between tribes and group activities like football games. NCA rehabilitates marketplaces that different groups share, encouraging them to interact. Sometimes help as simple as bicycles can move the process forward. When a committee was working to resolve a conflict between the Aballa and Misseriya tribes, “bicycles that NCA gave them made it much easier for them to move around,” says Abdelkarem. “In the past, lack of transportation hindered their shuttle negotiations.”

The programmes help vulnerable people earn money at the same time as they improve relationships. One project formed a group of 15 elderly women, some widows, from different ethnic groups and tribes. The programme gave the women a grinding mill to use together—people pay them to grind grain, and the women share the profits. Similar vocational-training projects—in trades like welding, tailoring, and driving–relieve poverty while they ease tensions.

Sometimes the problems are not based on tribal divisions or farmer-herder issues at all. In a camp for displaced people in South Darfur, a man accused another man from his tribe of stealing five donkeys. Through one committee’s mediation, the man admitted he had taken the donkeys and promised to pay back the money. After he paid back some of it, “the owner of the donkeys called the committee and declared that he had forgiven the man because of his sincere commitment and his attempts to resolve the matter,” say NCA staff. “After this, the people who live in the area celebrated the peaceful end of the dispute.”

Projects funded by ACT Alliance and Caritas aim to bring better days back to Darfur. Not every animal route or project works, but each one that does may save a life. “The programs are important and vital,” says Abubakar, the farmer. Despite his crop loss, Abubakar did not pursue vengeance. “I tell my children not to have a tribal way of thinking, where you kill people in revenge and take their land,” he says. “I tell my children, that’s not a good way to resolve problems.”