Ask an expert: Is there a right way to tell a child about their HIV status? 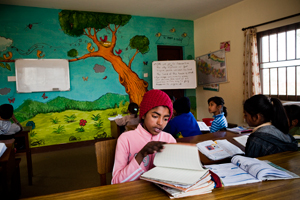 In Nepal, Caritas provides group housing and education for children living with or affected by HIV and AIDS. Credits: Katie Orlinsky/Caritas

Kristin Weinhauer is a Senior Technical Advisor for Health and HIV at Catholic Relief Service (CRS is a Caritas member). She previously worked in Vietnam overseeing several CRS health programmes including an HIV clinic, a drug rehabilitation clinic and work with highly vulnerable children.

Read the full interview in the HAART for Children 2013 Newsletter Issue No 1.

How would you describe “disclosure”?

Disclosing one’s status simply means that a person with HIV tells someone else that they have HIV. It could also be a parent or caretaker telling a child that they are HIV positive. Disclosure of HIV status to children is a process. The process involves caregiver and child, with parent or caregiver initiating and leading the process. A counsellor or health care worker provides a supportive role. Disclosure may also involve the sharing of caregiver’s and other family members’ HIV status. The disclosure process usually takes time and occurs after several counselling sessions.

Is there a “right age” in which to tell a child about his or her HIV status?

There is no “right age,” even in the United States and Europe there is no official guidance on the right age. Each child and each situation is different. Disclosure should occur according to a child’s development rather than chronological age. That stated, children at a younger age may be less likely able to understand what is sensitive to the caretaker. The caretaker needs to understand that other people with whom a younger child interacts may learn of their or their caretakers HIV status.

Who should be involved in the disclosure process and why?

What are the advantages of an early – let’s say during primary school – disclosure?

Again, the timing of disclosure is different for each child, you don’t disclose just because the child is of primary school age. But generally these are the pros: Children and caregivers psychologically adjust to living with HIV; Children who are disclosed to tend to adhere better to their treatment; disclosure increases a sense of control and thus self-esteem among children and adolescents; it helps adolescents make informed decisions about their behaviour; works towards reducing stigma, discrimination, and misconceptions and myths regarding HIV; lastly, family-centered disclosure builds trust in relationships and improves healthy communication between parents and children.

Not disclosing one’s HIV status can lead to inappropriate behaviour, such as refusal to take medication – since they don’t understand what the medicines are for – discovery of HIV status from wrong sources; loss of confidence and trust in parents; poor child-parent relationship and communication; confusion resulting from unclear messages and finally self-stigma and/or depression.

How can healthcare providers and parents prepare children for “the truth” about their HIV status?

Counsellors often work with parent(s) to disclose, over a number of counselling sessions, discussing concerns and finding a way for the parent to talk about HIV in a way that they are comfortable with. Similarly, during this time, counsellors will work with parents on allowing for the right environment for the child to receive this information. This often includes finding time to let the child share his or her own feelings openly, providing them with a safe place to cry and express bottled-up emotions and address fears.

Why do parents often fear disclosing their, and their children’s, HIV status?

Firstly because they feel guilty and blame themselves for their children’s condition. Then there are concerns about breach of confidentiality or in other words, fear that a person learning of their HIV status will tell other people and it might cause problems at their employment, school, community or family. Others simply don’t want to “hurt” their children and fear their reaction as well as the reaction of others which might lead to isolation, stigma and discrimination. There is a need for both the child and the parent or caregiver to receive support before, during and especially after disclosure.

A number of faith-based organisations, like Catholic Relief Services, directly or indirectly provide health-care services in many parts of Africa and in other low-income countries. How do these agencies operate?

CRS is not a direct implementer. We usually support our partners, which include faith-based and non-faith-based partners, health networks and health facilities and centres, and communities. We work in a number of ways to include training, sharing of international best practices and standards and overall health systems strengthening . Our audiences can include health care workers, support groups or other avenues for supporting people living with HIV and their families and communities