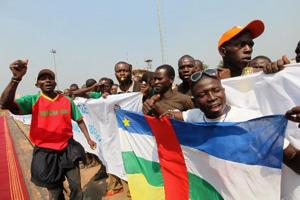 Bishops from Central African Republic (CAR) have made a desperate plea to the international community and their government to help communities who are being terrorised by rebels.

The country has been unstable since Seleka, a coalition of five separate rebel groups started to advance from the north in early December 2012. They have been accused of human rights abuses, including rape as a weapon of war. Communities who have been “taken hostage” by rebels have been cut off from any help and aid agencies have limited activity.

“A large part of regions in CAR is occupied by the SELEKA coalition,” said the bishops in a four-page message. “People in these areas are hostages, they live in fear, they flee into the bush and they abandon their fields. The sick are without care, hospitals are closed or have been completely destroyed and schools have been pillaged.”

Ten bishops signed the message, including Archbishop Dieudonné Nzapalainga, president of Caritas CAR. They drafted the message after a peace accords made in Libreville in January reached a standstill.

“Our people are tired of all of this useless and destructive suffering,” said the bishops. “The people of the Central African Republic have the right to live in peace in their own country and go about their business without worry.”

The bishops are urging the government and the international community to reopen roads to let aid get through, re-establish the phone networks, launch an international enquiry so those accused of crimes are brought to justice and guarantee the safety of communities. The bishops also appeal to the rebels to put an end to the rapes, killings and vandalism which they have inflicted on communities.

Caritas is asking for US$635,000 (468,000 euro) for a six-month programme that will start in February to help those vulnerable in CAR. The programme will focus on providing families with food and other items, medical and psychological support as well as improving infrastructure and livelihoods. Around 850 families in need (over 4000 people) will receive basic health kits and household items.

Up to 5000 people who have been uprooted in the unrest and are ill or injured will be given healthcare. Pregnant women and small children will be vaccinated against measles and meningitis and will receive mosquito nets to protect against malaria.

Caritas will train representatives in each community to give vaccines, spot signs of malnutrition and give emergency first aid. Women who have suffered sexual violence will receive counselling and psychological support from Caritas.

A wide-ranging infrastructure project will see Caritas repair wells, food banks, schools and latrines. In order to help people regain some autonomy following the disruption to their lives, Caritas will provide families with seeds and tools so they can start farming again.