Pope Francis on care for creation 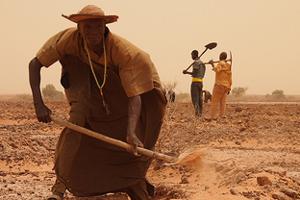 Caritas Niger (CADEV) Food for Work project in the village area of Karma, 60 km west of Niamey. Members of the most vulnerable families dig half-moons. These harvest rainwater and help recover areas for farming or grazing animals. Credits: Worms/Caritas

So this is the invitation which I address to everyone: Let us accept the grace of Christ’s Resurrection! Let us be renewed by God’s mercy, let us be loved by Jesus, let us enable the power of his love to transform our lives too; and let us become agents of this mercy, channels through which God can water the earth, protect all Creation and make justice and peace flourish.

Peace to the whole world, torn apart by violence linked to drug trafficking and by the iniquitous exploitation of natural resources! Peace to this our Earth! May the risen Jesus bring comfort to the victims of natural disasters and make us responsible guardians of Creation.

Let us look around: how many wounds are inflicted upon humanity by evil! Wars, violence, economic conflicts that hit the weakest, greed for money that you can’t take with you and have to leave. When we were small, our grandmother used to say: a shroud has no pocket. Love of power, corruption, divisions, crimes against human life and against creation! And – as each one of us knows and is aware – our personal sins: our failures in love and respect towards God, towards our neighbour and towards the whole of creation.

Fighting poverty, both material and spiritual, building peace and constructing bridges: these, as it were, are the reference points for a journey that I want to invite each of the countries here represented to take up. But it is a difficult journey, if we do not learn to grow in love for this world of ours. Here too, it helps me to think of the name of Francis, who teaches us profound respect for the whole of creation and the protection of our environment, which all too often, instead of using for the good, we exploit greedily, to one another’s detriment.

AUDIENCE WITH REPRESENTATIVES OF THE CHURCHES AND ECCLESIAL COMMUNITIES AND OF THE DIFFERENT RELIGIONS
Clementine Hall, Wednesday, 20 March 2013

The Church is likewise conscious of the responsibility which all of us have for our world, for the whole of creation, which we must love and protect. There is much that we can do to benefit the poor, the needy and those who suffer, and to favour justice, promote reconciliation and build peace.

In this, we also sense our closeness to all those men and women who, although not identifying themselves as followers of any religious tradition, are nonetheless searching for truth, goodness and beauty, the truth, goodness and beauty of God. They are our valued allies in the commitment to defending human dignity, in building a peaceful coexistence between peoples and in safeguarding and caring for creation.

MASS, IMPOSITION OF THE PALLIUM AND BESTOWAL OF THE FISHERMAN’S RING FOR THE BEGINNING OF THE PETRINE MINISTRY OF THE BISHOP OF ROME
Saint Peter’s Square, Tuesday, 19 March 2013

The vocation of being a “protector”, however, is not just something involving us Christians alone; it also has a prior dimension which is simply human, involving everyone. It means protecting all creation, the beauty of the created world, as the Book of Genesis tells us and as Saint Francis of Assisi showed us [. . .] In the end, everything has been entrusted to our protection, and all of us are responsible for it. Be protectors of God’s gifts!

Whenever human beings fail to live up to this responsibility, whenever we fail to care for creation and for our brothers and sisters, the way is opened to destruction and hearts are hardened. Tragically, in every period of history there are “Herods” who plot death, wreak havoc, and mar the countenance of men and women.

Please, I would like to ask all those who have positions of responsibility in economic, political and social life, and all men and women of goodwill: let us be “protectors” of creation, protectors of God’s plan inscribed in nature, protectors of one another and of the environment. Let us not allow omens of destruction and death to accompany the advance of this world! But to be “protectors”, we also have to keep watch over ourselves! Let us not forget that hatred, envy and pride defile our lives!

To protect creation, to protect every man and every woman, to look upon them with tenderness and love, is to open up a horizon of hope; it is to let a shaft of light break through the heavy clouds; it is to bring the warmth of hope! For believers, for us Christians, like Abraham, like Saint Joseph, the hope that we bring is set against the horizon of God, which has opened up before us in Christ. It is a hope built on the rock which is God.

To protect Jesus with Mary, to protect the whole of creation, to protect each person, especially the poorest, to protect ourselves: this is a service that the Bishop of Rome is called to carry out, yet one to which all of us are called, so that the star of hope will shine brightly. Let us protect with love all that God has given us!

Some people wanted to know why the Bishop of Rome wished to be called Francis. Some thought of Francis Xavier, Francis De Sales, and also Francis of Assisi. I will tell you the story. During the election, I was seated next to the Archbishop Emeritus of São Paolo and Prefect Emeritus of the Congregation for the Clergy, Cardinal Claudio Hummes: a good friend, a good friend! When things were looking dangerous, he encouraged me. And when the votes reached two thirds, there was the usual applause, because the Pope had been elected. And he gave me a hug and a kiss, and said: “Don’t forget the poor!” And those words came to me: the poor, the poor. Then, right away, thinking of the poor, I thought of Francis of Assisi. Then I thought of all the wars, as the votes were still being counted, till the end. Francis is also the man of peace. That is how the name came into my heart: Francis of Assisi. For me, he is the man of poverty, the man of peace, the man who loves and protects creation; these days we do not have a very good relationship with creation, do we? He is the man who gives us this spirit of peace, the poor man … How I would like a Church which is poor and for the poor!