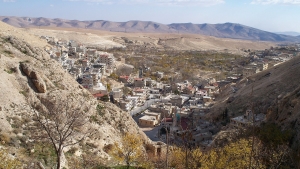 For Syria as a whole, the last few days have been extremely difficult.

Since the current unrest began, Syria has been threatened by armed rebels within the country and, for the last month, has suffered the interminable nightmare of the threat of a possible military attack from without.

However, the particular threat faced by Christian communities is coming to the surface. We have seen this both in the missiles that have rained down upon the ‘Valley of the Christians’ – “Wadi El Nassara” and in the kidnappings of priests and civilians from these villages. Maaloula is the latest and one of the most serious examples.

Malaloula, this tiny, ancient village, a symbol of Christianity, where most of the inhabitants are Christians…which has existed for over 2000 years….on whose soil numerous Saints have traveled or lived….considered an important place of pilgrimage….where the language of Christ, Aramaic, is still spoken…..home to the tomb of Saint Takla, the first female martyr of Christendom who lies in the convent that bears her name….and where the oldest Christian altar in the world can be found in the convent of Saints Serjios and Bakhos.

This small, peaceful village, recognised by the United Nations as a World Heritage site, has been invaded by armed rebels of the Jabhat al-Nusra (Al-Nusra Front) who have committed crimes against the civilian population and sacrilege in the churches and convents.

Fear of clashes between these rebels and the National Army has forced the inhabitants to flee the village in haste and to seek refuge in neighbouring villages or in Damascus, thus adding to the number of displaced people in need.

Since Caritas had already helped some families from Maaloula, we were able to communicate with them and discover where they are now living. And through their intermediaries, we have also managed to contact other displaced families and now know that most have found shelter with their immediate families or more distant relations. This, in turn, has placed a further burden on those who have taken them into their homes.

We have begun to provide aid in the form of assistance with rent, food baskets, mattresses and blankets and hope to increase this in the coming weeks so as to respond to their urgent needs and offer all the help possible.

As no early end to the current situation is in sight, indeed, it could continue for months to come, Caritas Syria is in the process of planning and studying other projects aimed at assisting those families still living in Maaloula as well as those displaced from here and other regions, especially now that the school year has begun and winter is not far away.

In the hope that the situation will not get increasingly worse, and in response to the appeal by His Holiness, Pope Francis I, we count on the prayers of the faithful throughout the entire world for peace in Syrian and the East.