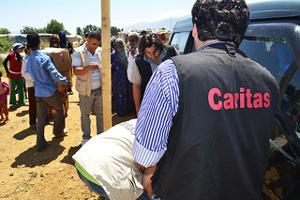 Caritas Internationalis says that the ongoing civil war in Syria can only be resolved through inclusive peace talks.

Caritas condemns all attacks against civilians. The combatants have a duty under international law to protect civilian lives. Caritas says the international community has an obligation to find an end to the suffering of the Syrian people, and that can only be achieve through broad dialogue.

Caritas Internationalis Secretary general Michel Roy said, “The Syrian people don’t need more bloodshed, they need a quick end to it. They need an immediate truce. Scaling up military intervention by foreign powers will simply widen the war and increase the suffering.

“The last decade bears witness to the tragic consequences of military intervention in Iraq, Afghanistan and Libya.

“Caritas believes that the only humanitarian solution is a negotiated one. Dialogue can end the war in Syria, safeguard the lives of the people and build a viable future for everyone. The priority must be to reinvigorate talks in Geneva as the first step towards a ceasefire and a peace deal”

A Syrian peace conference is planned to take place in Geneva this year.

Caritas Syria and other Church partners continue to provide humanitarian assistance to people, without regard to their religious or political beliefs. Caritas says all sides must ensure that humanitarian staff can reach those in need.

Pope Francis met King Abdullah of Jordan on Thursday. The Vatican said in a statement dialogue was the “only option” to end the conflict in Syria. The Pope and the King “reaffirmed that the path of dialogue and negotiation between all components of Syrian society, with the support of the international community, is the only option to put an end to the conflict and to the violence that every day causes the loss of so many human lives, especially amongst the helpless civilian population.”

Pope Francis called for peace during his Sunday Angelus in St Peter’s Square on 25 August. “It is not confrontation that offers hope to resolve problems, but rather the ability to meet and dialogue,” he said. “I launch an appeal to the international community to be more sensitive to this tragic situation and to commit itself to the maximum to help the dear Syrian nation find a solution to a war which spreads destruction and death”.

Bishop Antoine Audo, the President of Caritas Syria, said, ” We hope that the Pope’s call for real dialogue between the warring parties to find a solution can be a first step to stop the fighting.”

For further information please contact Patrick Nicholson on +39 06 6987 9725 or by e-mail at nicholson@caritas.va.