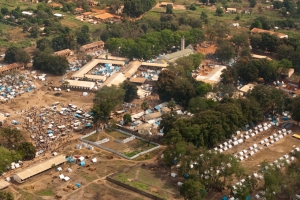 Even from the air, the situation looks scary. The plane circles the deserted town, not a soul in sight. As the descent begins, hundreds of white and blue spots can be made out; they’re the canvases of the makeshift tents of the displaced. Then finally movement, as thousands of people mill around the cathedral. Life is concentrated within an absurd perimeter, fifty times smaller than the original town with its population of over 40,000 people.

The plane lands on the dirt runway, which is marked out by a few soldiers from the Multinational Force of Central Africa (FOMAC). At all African airfields you see children who have come to see the planes land, fruit sellers, and onlookers. Here there are no civilians in sight. Only a handful of soldiers and a few 4×4 vehicles belonging to NGOs, their engines running, waiting to pick up staff or equipment before speeding back to their encampments.

The five-minute drive from the airfield to the bishop’s palace reveals a scene of desolation. Houses have been burnt down, the bush has already grown back, and the centre of Bossangoa has been abandoned, just as the imposing police station has, its doors wide open.

We pass through a checkpoint manned by former Seleka rebels before reaching the gates of the bishop’s palace. There are people everywhere. On the steps, behind the heavy metal doors of the Catholic mission, and even on the parking place of the Caritas vehicle, one of the rare 4x4s not to have been stolen.

“In any case,” Father Michel told me, “the vehicle isn’t much use to us. We can no longer drive within the diocese. There are too many people. And outside, apart from the access road to the airfield, we can’t go beyond a 5-kilometre perimeter. We’re trapped here.” 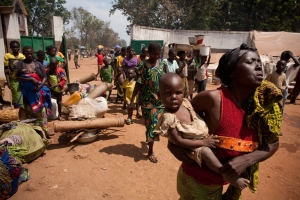 Internally Displaced Persons (IDP’s) arrive to take shelter next to the Cathedral on November 10, 2013 in Bossangoa, 380 km north of Bangui. Credit: Matthieu Alexandre/Caritas

The former Seleka rebels have set up their camp 300 metres from there. The circle is closing in. Even the FOMAC position is now further away, and you have to go past the rebels to get to it. The militiamen have established a reign of terror. They fire at or slit the throat of anyone who strays far from the cathedral. Only women can still go to the fields.

The rebels have also managed to intimidate the FOMAC forces, on whom they have imposed a 5-kilometre patrolling perimeter. The former Seleka rebels can also continue to perpetrate abuse in the neighbouring villages with complete impunity.

Understandably, the surrounding villages are deserted. There’s not a living soul within 100 km. Each day, the survivors who seek refuge in the bishop’s palace come from further and further afield, as the ring of terror widens.

I’ve been involved in social and humanitarian reporting for over 15 years. I’ve worked in more than 30 countries, and I’ve also tried hard to spotlight hope, even in the darkest situations. I’ve photographed life in the shantytowns of India and Brazil, the poverty of the homeless in Harlem and Paris in the depths of winter, and the suffering of war victims in Iraq, Lebanon and Syria, but I’ve never seen distress like this.

Despite the extraordinary dedication of Msgr Nestor and all the priests who continue to pray and celebrate mass, I saw no sign of hope in Bossangoa. The displaced, trapped in a conflict that overwhelms them, are suffocating.