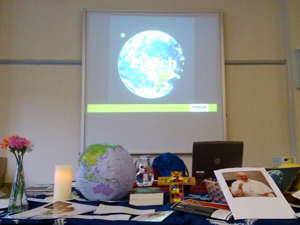 It is a tragic irony that as a super-typhoon devastated the Philippines last week, officials from around the world gathered at the annual UN climate talks in Poland to discuss action on climate change.

While we can never say definitively that one single weather event is caused by climate change we do know that changes to our climate could make weather events – like typhoons – stronger and more intense.

Yesterday, I arrived in Poland (which is hosting this year’s talks) along with our partners Caritas India and CIDSE to talk to politicians about how climate change is placing a heavy burden on the planet and some of the world’s poorest people.

Last week’s super-typhoon may be an ‘extreme weather event’ but all over the world communities are struggling every day to cope with the consequences of climate change.

Father D’Souza, Director of Caritas India, has told me about the impact of climate change on some of the communities in his country.

In the Sundarban region of India, changes in temperature and rainfall are affecting crops like watermelon and chilli and farming is becoming much more difficult due to changes to the land. Warming oceans also means that catching fish – which are sensitive to such changes – is becoming harder too.

So what do we want from these climate talks?

SCIAF believes that we have a duty to care for creation and that we should all have the opportunity to live life in dignity and to the full.

The poor and vulnerable have done least to cause climate change but are suffering the most from its impacts. There is a moral and historical responsibility, therefore, for richer countries – which have done most to cause the problem – to lead the fight against climate change.

The world is due to make a global deal on climate change in 2015. But it is important that this deal is fair and just and is ambitious enough to protect the dignity and rights of the world’s most vulnerable people.

Yeb Sano, representing the Philippines at the climate talks, said last week “the climate crisis is madness. We can stop this madness”. And he is right. But to do this leaders must show real courage and take bold action.

I’ll be sharing our experiences of the talks here in Warsaw over the next few days. Look out for us on Twitter using #COP19 #UNFCCC and #IamSCIAF to follow the action and share your views.