Parts of Philippines like a “valley of death” after typhoon 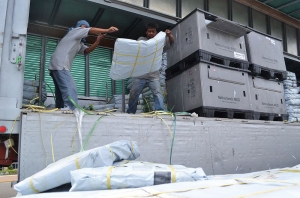 6,500 shelter kits arrive in Cebu port (November 17th) to be shipped to Leyte island, where they will be distributed to people who lost their homes in Typhoon Yolande/Haiyan. This is the first batch of Caritas shelter kits. Over 30,000 more are due to arrive over the coming days. Credit: Eoghan Rice – Trócaire / Caritas

Working out of the local Church, CRS handed out hundreds of tarps in Palo where they will replace roofs blown off by Haiyan to house families now living without roofs or, in many cases, any sort of housing.

Palo is a town on the island of Leyte, south of the main city of Tacloban on the east coast where the storm made landfall with winds approaching 200 mph.

Archbishop John Du of Palo said, “When you stand on the hill at my place in Palo, you look down and what you see is like a valley of death, as if a bomb has been dropped – almost everything is destroyed.

“In spite of that we are still hopeful that we will rise from this ordeal, because of the support of our neighboring dioceses, provinces and countries.”

It was an all-day trip, a long drive that went up to the north end of the island, around the mountains that run down the centre of Leyte, then south through Tacloban to Palo. The road was mostly clear, but there are snarled power lines everywhere.

In Ormoc, there’s a buzz of activity. People are out doing things. But in Palo, it’s the opposite. There’s very little going on there. It’s quiet. The markets are not open. I saw no food for sale. The destruction is so bad, people don’t know where to start. I heard maybe one chainsaw working, that’s it.

There is no electricity. People were cooking whatever rice they had over fires made from salvaged debris.

I heard a story from a man in one neighborhood who lived in a two-story concrete house and thought he’d be fine. But when Haiyan hit, the water was pouring in like a tsunami while the roof was being torn off by cyclone winds. He thought he’d die, but he survived. He said many of his neighbors died.

Palo is the seat of the archdiocese that includes Tacloban. CRS is working with the Church there. There are several hard-hit parishes near Palo, including Sante Fe and San Joaquin. No one knows how many people died there, but one priest told me he thought he’d lost between 1/3 and 2/3 of his parishioners.

We went farther south from Palo and found small towns that were hit just as badly with massive numbers of people impacted by the storm. In Tacloban, there is a buzz of activity with planes landing and many journalists. No one has gotten to these places farther south. The people have been on their own.
As you travel through this area, you look out on a landscape that before the typhoon was lush and verdant. Now, when you look into the mountains, it’s completely different. The trees are all toppled. What used to be green is now brown.