Peace in Central African Republic: an archbishop, an imam and a pastor join forces 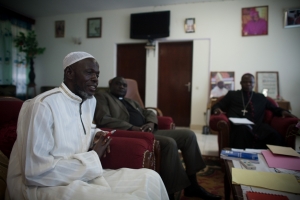 Religious leaders have come together to try to bring peace in the Central African Republic. They face enormous challenges but have faith they can succeed.

The country has been described by the United Nations as a ‘tinderbox’. France has gone further, saying it’s “on the verge of genocide”.

In March 2013, a coalition of local and Chadian and Sudanese fighters called Seleka overthrew the government, seized the capital and plunged the country into anarchy.

Seleka fighters have identified themselves with Islam, have targeted churches and tried to stoke interreligious tensions. Militias, sprung up to defend the local populations, have launched wider attacks, including against Muslim communities.

Archbishop Dieudonné Nzapalainga: We first got together in December 2012, when the then President Bozize was inciting Christians to violence against their Muslim brothers and sisters, scaring people with talk of a wave of Islamisation and encouraging them to take up arms. We got together to protect Muslims.

When the Seleka movement took off in December they stole vehicles and assaulted people. The Christian community felt that this violence was directed at them. This was something new, we hadn’t experienced this before. Before we lived together in symbiosis. We didn’t want to let Seleka destroy all this shared history.

Imam Oumar Kobine Layama: Seleka has torn our social fabric with their actions. Their behaviour is forbidden in our religions –both the Bible and the Koran say that Christians and Muslims should live together in peace.

When Seleka come, Muslims have to pay to protect their shops. Because they speak the same language, the Chadians and Sudanese come to them and the Muslims aren’t able to refuse their demands for fear of reprisal, but they don’t sympathise with Seleka. We need to avoid our communities falling into inter-communal violence.

Archbishop Dieudonné Nzapalainga: We travel to places where tensions or violence is reported to speak to both sides and try to diffuse the situation. We set up a training workshop to communicate our vision, to enable people to live together.

Imam Oumar Kobine Layama: Our platform is here to educate and facilitate reconciliation in communities. We need to stand together to fight this violent behaviour. When we preach this message most people accept it as an act of national cohesion and fraternity, they follow us. My biggest fear is that Seleka does not want this interreligious platform.

Pastor Nicolas Guerékoyame Gbangou: The biggest challenge is security and this affects everyone, both Christians and Muslims. children have no longer access to education , schools are destroyed benches burnt this will have long term consequences. Hospitals have been looted, and people are left to die without care. People have not been able to plant because of the violence, famine is looming and we all be beggars if assistance does not come.

Imam Oumar Kobine Layama: Disarmament needs to be done quickly. There are mercenaries here and we’re very concerned about integration processes – we can’t integrate criminals into our armed forces , this is non-negotiable and we will be vocal. We need to stand and protest against the misuse of religion and we need to train more agents of peace and place them across the country.

Archbishop Dieudonné Nzapalainga: The civil administration exists only in name. We can rehabilitate the buildings but the civil servants are afraid to return – we have to protect them so they can take up their duties and to do so we need a professional army made of people who love their country and seek to protect its citizen.

Pastor Nicolas Guerékoyame Gbangou: The transitional process should take place in 18 months. We need to pacify the country quickly through disarmament and have credible elections to bring back stability.

Archbishop Dieudonné Nzapalainga: Our main challenge is to live together when we’ve been shattered by violence, it makes us suspicious of each other, that our neighbour is an informer or a collaborator. Reconstructing the social fabric will take time. Disarming people is one thing, disarming hearts is a much harder task at hand.

Pastor Nicolas Guerékoyame Gbangou: The international community needs to step out from its indifference. We are counting the dead, why are you waiting for a genocide before you intervene? You must prevent the conflict. I would urge the countries who are hesitating to engage urgently and rid us of those mercenaries.

Archbishop Dieudonné Nzapalainga: We know that if we don’t act, we’re complicit. The Central African Republic will become a sanctuary for terrorists, bandits and drug traffickers. We have frontiers with six countries and they will be able to launch attacks into these. Here, they are warlords. They have the right of life and death over the people and their number is rising by the day. The international community must come quickly.

Caritas need to be reinforced in order to assist more people. We need the funds and support to enable the aid agencies to care for people and begin real development. Our humanitarian appeals are underfunded. We’re watching people die before our eyes like animals. It’s time to react.