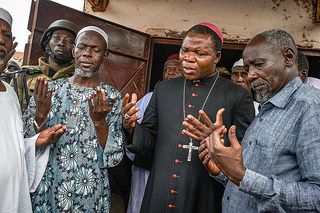 Archbishop Dieudonné Nzapalainga of Bangui joins Muslims in prayer for an end to the crisis in the Central African Republic. Credit: Sam Phelps for Catholic Relief Services.

Cheers rang out from the 40,000 people trapped in the Catholic Mission in Bossangoa as peacekeeping troops arrived. “It came as a huge relief,” said Fr. Alain Eouanzoui, the Vicar General of Bossangoa, “We believe the nightmare might soon be over.”

For the town in the north of the war-torn Central African Republic it was the first good news in three months. Thousands of people had been flooding into the Church Mission since armed gangs had begun terrorizing the town and the villages in the area in September.

The hours and days leading up to the arrival of the peacekeeper reinforcements had been particularly tense. Over 500 houses had been burned down. A rocket had landed in the compound, miraculously not killing anyone.

Two children fetching firewood outside compound perimeter had been seized. “We still don’t have news of these children,” said Fr. Alain.

For the people in the Catholic Mission in Bossangoa, the ordeal isn’t over. They must stay put for now as their safety can’t be guaranteed and many of their homes have been burned down.

Nevertheless, for people who went to sleep fearing death in the morning, the tension has lifted. “They’re rejoicing,” said Fr. Alain, the Vicar General of Bossangoa. “They all think we’ll be able to spend Christmas with joy and peace.”
In Bangui, after days of fighting the capital is more calm but still on edge. Tens of thousands of people are seeking safety in churches and other places of worship.

“Helicopters fly overhead, the tension and fear is palpable,” said Petula Malo of Caritas Central African Republic. “There is still shooting in some parts of town and we’re too frightened to go outside.”

“We hope the situation will normalize soon so that we can fly to the rescue of all those in need of food and medicine,” said the archbishop.

Aid is desperately needed in the Central African Republic. 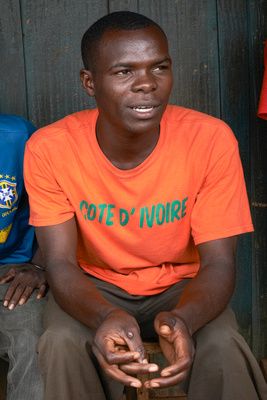 “A child died in the night,” said Fr. Federico Trinchero, who works in a Carmelite mission in Bangui. “We have a very young doctor and no medicine.

“We have given our rooms up. We have 2,600 people here. It’s been like this since 5 December. We must also stay up to guard the compound too, but we fell asleep. We’re too tired. We need help today, not tomorrow.”

The upsurge in violence is the latest tragic twist in an ongoing catastrophe that began when a coalition of local and foreign fighters called Seleka seized power in March.

They brought with them an epidemic of pillaging and murder. The anarchy soon spawned inter-communal violence which had a veneer of Christian against Muslim, tilting the fragile state towards civil war.

Yvon Maxime is a 17-year-old student in CAR’s capital, Bangui, who earns some money delivering goods on his motorbike.

“It hurts to hear what is happening in Bangui at the moment. We only pray now that God will give us back peace in our country and bring back unity so Central African Republic can work again,” he said.

“There was not tension between Muslims and Christians before and it hurts me to see what is happening now in our country. We have to stick together as Christian or Muslim.”

In Bozoum in the north, 4,600 people are in the Church mission in Bozoum.

Local Caritas director Fr Aurélio Gazzera said, “We have opened the doors to everyone, Christians and Muslims alike. We give food to people who are at the mission but also to 2,200 people who fled to the mosque .

“We have no interreligious or inter-community problems. The problem is with the Seleka [the armed gangs who seized power in March].”

On Saturday, men armed with machetes and knives tried to enter the church compound, but Fr Aurélio blocked them. Caritas staff have been threatened as they collect the dead.

But Fr Aurélio is undaunted. He has organised a football match between Christian and Muslim men as a way to bring the community back together.